The Hummel Report: A Bump in the Road

“I mean it’s great that we have newly paved roads, but when you go back and cut ‘em back up, it defeats the purpose. If the idea is to repair it to what it was, a brand new road, it’s not happening.’’-Providence local Jim Damico 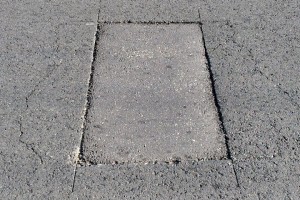 Wherever you go in Providence, they are hard to miss: freshly paved streets. A welcomed relief for beleaguered motorists who for years have had to navigate through streets besieged by potholes. The city is more than halfway through a $40 million paving project approved by voters in 2012 and expects to finish ahead of schedule by the end of the year.

“I think the paving has actually been great. Because we’re out here on Manton Avenue, it was pretty much hellacious. It was all chopped up, ’’ says Jim Damico, who lives in Providence near the Johnston line and rides his bicycle every day the weather allows him to. So he notices things about the roads many motorists don’t.

We first met Damico two years ago after the city repaved and installed a bicycle lane on Broadway — his preferred riding route to work on the East Side. He was concerned then that within months of the paving, utility markings appeared on the street. And some other streets were dug up shortly after the paving work.

Now, Damico says, it’s happening again. “They repaved it and I’ve been noticing more and more utility companies are coming in and cutting up the roads, which seems to be antithetical to the $40 million the taxpayers have invested in,’’ he said.

Providence Director of Public Works Bill Bombard said most of the work is being done as emergencies. He said the utility companies signed an agreement in 2008 not to work on newly paved streets for five years unless it was an emergency. And if they had to, the street had to be restored to its newly paved condition.

We went back to Bombard last month to talk about markings and cuts The Hummel Report has seen on newly paved road throughout the city.

“Utility cuts can accelerate the decay of a road exponentially,’’ Bombard acknowledged. “Once you break that mat, you create a seam, the seam allows for water to penetrate the road. Saturate the base and it makes it decay more quickly.’’

Bombard says he meets with the utility companies monthly and has made it clear to them the city needs to protect its investment.

“We’ve spent taxpayer money to fix these roads. We don’t want you digging them up just because you want to put a new water main, new gas main, new electrical line,’’ he’s told the companies. “It’s not that it totally prevents (work), just make sure that they do extra work to restore it back to the condition it was — curb-to-curb paving, for example.’’

But Damico questions whether the city is putting any bite behind its bark, saying he’s seen little change since we first spoke with him in the summer of 2012.

“Right up on Manton Avenue they just finished paving in December and it’s already marked up with Providence Water and National Grid.’’

Damico also took pictures of a section of Chalkstone Avenue that was paved last year. A cut was made within weeks and hasn’t been restored almost nine months later. One day last month we found a National Grid crew working on a section of Chalkstone Avenue just east of Mount Pleasant. Bombard produced permits the utility pulled for of the work, indicating it was an emergency.

“When we receive a permit application, we compare that against a list we maintain for recently paved roads,’’ he said. “We call these protected streets. So if they absolutely have to disturb the road, then they recognize they have this additional cost as opposed to simply patching a trench.’’

Translation: They need to make the cuts they’ve made disappear and look like the original paving job as outlined in the protected street agreement between the city and utility.

We found another section on Canal Street that was cut up in March. “If it is an emergency, fine, but you still shouldn’t let the cut not be repaired properly for more than 30 days,’’ Damico said.

Bombard said the road needs to settle — usually for about three months — before it can be repaved. That doesn’t answer why the Chalkstone cut has not been repaved more than six months later.

Damico questions whether the city is going back to make sure the work is done according to spec. “I mean it’s great that we have newly paved roads, but when you go back and cut ‘em back up, it defeats the purpose. If the idea is to repair it to what it was, a brand new road, it’s not happening.’’

And he a has simple message for the city: “Please, please protect the investment. Because $40 million is a lot of cash. Please hold the utility companies responsible and accountable.’’

The Hummel Report is a 501 3C non-profit organization that relies, in part, on your donations. If you have a story idea or want to make a donation go to www.hummelreport.org, where you can also see the video version of this story. You can mail Jim directly at jim@hummelreport.org.