Didn’t everyone, at some point in their lives, dream of being a rock star? The desire to make music and art can start very young; however, the music scene tends to be very male-dominated. So where can young girls and gender non-conforming kids go to find role models and learn new instruments? In our state, the answer is Girls Rock.

Girls Rock is an RI organization that focuses on helping women and girls, along with trans and non-binary adults and children, find empowerment by creating their very own rock bands. It’s a group that operates year-round through classes and after-school programs, with a primary focus on their day camp that takes place in the summer.

Empowerment seems to be the key word here. I spoke with the founder and executive director of the program, Hilary Jones, and she placed a very strong emphasis on this concept, making the mission of the program very clear.

“Our outcome is empowerment,” Jones says. “For us, it’s about whether they’re leaving camp feeling like they’re able to achieve goals in their life.” In surveys conducted by the camp, the young people involved in the program have reported that they gained greater self-esteem, which likely contributes to the program’s 60% return rate.

Some kids come to the camp to learn a specific instrument. Others had parents suggest the program to them as a way to find like-minded people. A number of young people who come into Girls Rock do so because of a desire to meet different types of people outside of their schools.

The Girls Rock summer day camp consists of five days of musical training, culminating in each group writing and performing its own original song at an end-of-week performance. It begins when participants form their individual bands. The first day at camp is devoted to this, allowing the kids to foster working relationships with other young musicians. 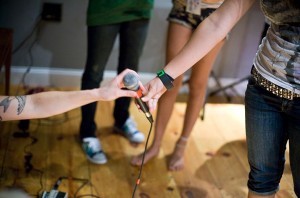 After that, a typical day at camp starts with an icebreaker, followed by the morning band practice. A workshop usually follows, which can range from topics around media literacy to body issues to discussions of power and privilege. At lunch, the kids are treated to a performance by a local band, primarily made up of women and trans or gender non-conforming people. Campers can participate in a question and answer session with the band afterward, giving kids the opportunity to learn more about what goes into making a successful band.

The afternoon begins with another band practice, followed by another workshop. At the end of the week, the campers participate in a concert that features their original songs, allowing them to display the musical techniques they learned throughout the week. That event is open to the public, so anyone can come check out what these talented young people create.

Aside from music education, gender studies are a very important part of the camp. Trans and non-binary kids are welcome to participate in the camp and afterschool programs, as the organization is all about making everyone feel included. Jones stresses this, stating that a big element of the camp is questioning the concept of gender, and what that means.

Many of the workshops that occur in both the camp and the year-round programs emphasize gender concepts, allowing both young people and adults to explore their own definition of the idea of gender fluidity. People of any age are also welcome to start and lead their own workshops, which can be about anything from racial privilege to Beyonce.

While the summer camp is a major part of Girls Rock, the year-round afterschool programs are also beneficial for those involved with the organization. There are lessons in instruments and songwriting, a free youth drop-in program to try out an instrument or participate in a jam session, and even a gear-loan program, which allows anyone to check out an instrument after leaving a small deposit.

The inclusivity of these programs is astounding, and very welcoming to anyone who has a creative idea, wants to discuss social justice issues or simply wants to sharpen their musical skills. The kids camps run in two sessions, one in July and one in August, while the adult three-day intensive will happen in the fall.

For more information, check out girlsrockri.org

Catch You at the Flip Side