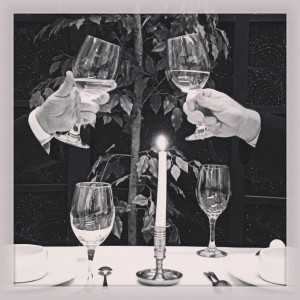 Counter Productions Theatre Company is kicking off a series of new works that represents a broad scope of story and local talent.

“I’m a serious fan of all of the playwrights we’ve worked with,” says Counter Productions artistic director Theodore Clement, “To enable the creative theatrical process from the first draft to final production is the most fulfilling experience to be had in our craft.”

First up is Le Dernier Repas: A Love Story by David Eliet. “The play follows two Frenchmen, Robert and Louis, sitting down for the lavish meal of their dreams. Set against the backdrop of the Holocaust, the two reminisce on lost love, family, friendship and food.” Eliet is one of Rhode Island’s most notable playwrights, and a new work by him is always an event.

“Le Dernier Repas was the result of 10 years of writing about The Holocaust that started in 1994 when I met Magda Bednarova in Bratislava, Slovak Republic,” says Eliet. “She had saved the life of her then boyfriend, and her husband had saved 200 Jewish lives.”

In addition to seeing Geoff Leatham back at at CPTC after his incredible performance in Waiting for Godot, Clement himself is stepping onstage to take on the other role.

“I was drawn to the beautifully written characters, and their uncanny ability to celebrate what they love despite their incredibly difficult circumstances,” says Clement.

Isabella by David J. Valentin is a work with which Counter Productions has had a long-standing relationship —developing the show over time with readings and feedback. “Isabella is a deeply personal expression of David’s viewpoint on love and family,” says Clement. “It possesses a raw and brutal honesty that is genuinely compelling.”

Similar to their “Readings in Autumn” series, this year Counter Productions has devoted its entire Readings series to women playwrights.  Artistic director of Out Loud Theatre Kira Hawkridge will be helming The Analog Play by Diane Exavier on May 17.

“This play deconstructs our depersonalized keyboard culture, and the way that it effects our most intimate interactions,” says Clement. “I’m fascinated by Diane’s almost mystical portrayal of internet dating and sexuality, and the ways that it creates distance rather than connection.”

Stalking by Jayne Hannah will close out the CPTC Season. It’s being directed by Victoria Ezikovich who audiences will remember from her fantastic performance in the theater’s world premiere of Kill the Virgin.

“[Stalking] is dark and violent, and extremely well-written,” says Clement. “It deals in deception and possesses a twisty plot. It’s a terrific opportunity for the actors involved. Definitely not for young audiences.”

With four brand new plays in store for the coming months and a residency in the heart of downtown Providence, Counter Productions has become the go-to place for new work that tackles relevant themes from contemporary voices.

In Providence: Checking In

In Providence: A Paper Elephant