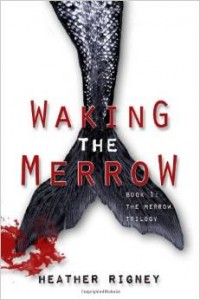 There have been surges of popular, old-school monsters lately. Vampires were all the rage thanks to Twilight and zombies became popular due to The Walking Dead, though it should be said that zombies have always been awesome. If author Heather Rigney has her say, mermaids (or merrow) could blow up into the next big thing, with her new novel, Waking the Merrow, leading the charge.  Besides The Little Mermaid and one episode of “Futurama” that featured a mermaid, I’ve put little to no thought into the half human, half fish creatures that lurk in the sea. But Waking the Merrow piqued my interest, and soon had me searching for more information about mermaids.

Mermaids, or merrow, as they like to be called, have been around for hundreds of years. There are good and bad merrow and Nomia and her crew, who call Narragansett Bay their home, are the bad ones. Using their beauty to lure men to their death, they feast on the flesh, bones, blood and every other part of their victims. In the story, Nomia is responsible for enraging Rhode Islanders enough to burn the Gaspee after the captain used her for sex with no intentions of taking her back to England with him, and this is actually the most tame of her actions.

Evie McFagan is an overweight, alcoholic mortician in her late 30s  living in Pawtuxet Village with a husband she adores, though doesn’t exactly show it, and a young daughter. She meets Nomia, and the two eventually settle into a nicely developing feud that becomes both terrifying and humorous, especially told through the first person eyes of Evie. Their rift becomes so bad that it turns into an epic battle between a clan of nicer mermen from Ireland and Ronan, Keeper of Narragansett Bay, who watches over Evie and her family from the water, and the man-eating mermaids.

I was amazed at how accurately Rigney describes the Pawtuxet Village area. The directions and locations are so clear I could almost map out the area, and I enjoy traveling by different landmarks she speaks of, such as Rhodes on the Pawtuxet, the bridge or the rocks near the water. The Village is described so beautifully that I’m expecting to see her words used in a future brochure.

Rigney has struck gold with her first novel. It’s humorous — hysterical at times — descriptive and has a nice flow to it. Going back and forth between Evie in the present and Nomia’s past exploits, with a few chapters dedicated to explaining their connection and how merrow migrated to Rhode Island from Ireland, there’s not a boring moment in these pages. I love the flawed likableness of Evie and the intrigued hatred I felt for the malevolent Nomia. Rigney is able to show the great chemistry that the two have, especially for being newfound enemies. They are both relentless, with the other characters either helping out or bearing the brunt of their actions.

This is the first book in The Merrow Trilogy, so I assumed the book would have a somewhat “safe” ending, with no major characters getting killed off. While my assumption did take away some of the suspense, it didn’t decrease my enjoyment of the story whatsoever. This book did a great job of setting up what promises to be a three-book thrill ride. The setup for book two had me salivating, immediately wanting to read it, knowing that I’ll have to be patient.

I spoke with Heather Rigney and asked her a few questions about her book.

Bobby Forand: Where did you get the inspiration for Waking the Merrow?

Heather Rigney: Two things inspired my debut novel — Pawtuxet Village and an Irish folktale. Pawtuxet Village has been my home since 2003. I love the people, the history, the community and our access to Narragansett Bay. My novel is my homage to both the Village and Rhode Island. I’m proud to be a Villager and a Rhode Islander. We are a tiny, weird state, but we have a lot to offer.

The Irish folktale “Flory Cantillon’s Funeral” by T. Crofton Croker was another crucial inspiration. I discovered Croker’s short story in the anthology Fairy and Folk Tales of the Irish Peasantry, edited and selected by W.B. Yeats. It’s a strange, comical tale that alludes to inter-species marriage between land-dwellers and sea-creatures. I read it when I was a teenager, and it has always stayed with me.

BF: Describe your writing process. Do you find it more difficult to write the story or edit?

HR: Editing is a beast. A demanding, meticulous, ugly beast. Writing is all about creativity and flow. In sharp contrast, editing is all about refinement and perfection. It takes a lot out of me to push for perfection. I prefer the creative flow part. Both aspects of the craft are rewarding in their own ways, but I find writing so much more relaxing.

BF: How much research went into Waking the Merrow?

HR: Quite a bit. Knowing that I was leaving the realm of reality by introducing a man-eating aquatic monster to my readers, I wanted them to feel grounded and safe. If I’m going to hold out my hand and say … Come with me, dear reader. I want to show you strange and wonderful things … I need the reader to feel as if they are on familiar ground. The fantasy illusion won’t work if the writer does not include relatable elements for the reader, so I dug around and found as many historical, nautical accounts as I could. Then I warped what I researched and re-wrote history. For example, in my world, the burning of The H.M.S. Gaspee had a far more sinister stimulant than just angry, bullied colonists. In my world, a jilted merrow instigated the mob that burned a British ship and shot the commanding officer.

BF: What impact has growing up in Rhode Island had on this book?

HR: Everything. In my teenage angst, I thought, “I hate this state. I’m leaving as soon as possible.” Then, in my 20s, after I graduated from RISD, I secured an amazing teaching job with Warwick Public Schools, and, as time went on, I moved to Pawtuxet Village and started my family. Looking around, I’ve come to realize that Rhode Island is wonderful and quirky. We’ve come a long way. I remember being terrified of downtown Providence when I would go to shows in the early ’90s. Now, I’m so proud of what Providence has become. Buddy Cianci had a vision for us, and it is blossoming. We are a blooming state. I wanted to embrace all of our history, our mixed cultures, our kinship with the sea, and even our strange, rich sayings like, taking a heart attack. My Pennsylvania-born editor went round and round with me on that one. She thought it was a typo. No, I told her. We take heart attacks. I don’t know where we take them — but we take them.

BF: What was your motivation behind writing a trilogy?

HR: My alcohol-fueled, protagonist Evie (rhymes with heavy) McFagan and her evil merrow nemesis Nomia have more tales to tell. I didn’t want to limit them to just one book, so a trilogy sounded like a good idea.

BF: How did you get hooked up with Cycling Mermaid Press?

HR: I’m self-published. Cycling Mermaid Press is my company. I’m very happy on my bicycle, and my art has always included mermaids. Now, my writing is mer-based. So yes, that’s me, the cycling mermaid.

BF: Rhode Island seems to have a growing community of writers.  Can you discuss that?  How did you get involved in the local writing scene?

HR: Friends persuaded me to take a children’s book writing class through the continuing education department at RISD. In that class, I met two other writers. When the class ended, we didn’t want to stop interacting, so we met on our own. We invited others to join, and we had a few good years of monthly critiques. We’ve since drifted apart but still support one another. Recently, one of my old critique partners invited me to join ARIA (Association of Rhode Island Authors). This is a wonderful community under the enthusiastic direction of Steven Porter. It’s been a pleasure to be part of this association, and I encourage other writers to join ARIA.

BF: What do you hope readers get out of Waking the Merrow?

HR: My main character, Evie, is an anti-hero. She’s fundamentally flawed, but I tried to make her likeable. I don’t know anyone who is not flawed. There is beauty and honesty in our imperfections. Our purpose in life is to both accept, and then work with, these personality defects. Our ugliness is our superpower, in a way. Much like Evie, we might be a lot happier if we could just harness these superpowers. But—achieving self-acceptance is a process. A long, grueling process. I just hope my novel makes the journey a bit more enjoyable.