Book Review: Life, Liberty and the Pursuit of Sanity 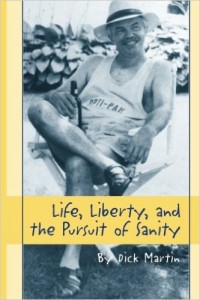 Dick Martin was born and raised in Gloucester, RI, and made his living as a teacher at Burriville High School (and then Killingly High School in Connecticut) while moonlighting as a columnist for various local newspapers. He won numerous awards and inspired groups of students who have also won awards. He had humble beginnings growing up on a farm, a tradition that he continues to this day by living on a portion of the farm he grew up on and maintaining a farm-life mentality. I think that this is why Martin has a simple but interesting take on life. These 81 columns (or 80 and a poem if you want to get technical) are a testament to his easygoing, rural lifestyle and how it shaped him as an adult.

After the first few columns, I was getting a Mark Patinkin (columnist for The Providence Journal) feel.  The columns were lighthearted, interesting and easy to read.  I got a real sense of who Dick Martin was, or at least the person he portrayed himself to be. I couldn’t help but think of the kids from The Sandlot when reading his columns, especially the ones focusing on his childhood. There’s a true innocence to his writing.

“Investing In …What?” made for an odd first impression. It is about a relative of a friend who spent $5,000 on breast implants. The entire column came off as sexist and a bit odd, which would be okay if that’s who Martin actually was, but that doesn’t seem to be the case after reading his other columns. I took note of this column in particular because it kicked everything off; it didn’t seem like a good choice.

His family is prominently written about, especially his mother (subject of “Mae”). His columns paint a clear portrait of his family life and individual members of his family. “Everything is There” is a great piece about the siblings cleaning out their mother’s house, finding memories of youth and not wanting to let things go  He at least got a column out of it (as he cleverly comments).

“Sometimes You Get More Than You Expect” is a chilling column about Martin interviewing a medium for a column, only to unexpectedly have an experience of his own. The medium started sensing things halfway through their interview, which came as quite a surprise to Martin.

My favorite columns are his “Dear Dick,” which has him answering reader questions, or “fan mail,” as he calls it. The readers aren’t asking the most in-depth of questions, and Martin’s answers are lighthearted and humorous. I wish there were more than two of these, but I guess that is what Google is for.

Reading these columns are akin to listening to Teenage Bottlerocket or The Descendents — I can relax and smile, if even for only a few moments. His writing is simple, which allows me to take a break and get lost in his thoughts. His columns take no more than five minutes to read, but it’s hard to put the book down, as I’m always interested to know what he is going to write about next. This is a book that was made for multiple readings.