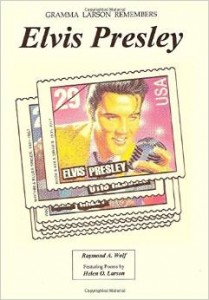 Elvis is arguably one of the most influential artists of all time. He bridged the gap between the white-dominated country sound and black-dominated blues sound, eventually bringing rock ‘n’ roll to the mainstream of screaming girls (and their jealous, but intrigued boyfriends) and even becoming the alleged first boy band. He could sing, act (sort of) and had the looks of a superstar, a combination that turned him into the biggest star of the ’50s. This eventually became tiring to some, turning Elvis into a parody of himself and a running joke. Others still thought of him as the King, loving his every move and devastated by his death. Helen Larson fell into the latter category, admiring him since 1956 when she bought her son, Raymond Wolf, a portable record player and some records, including “Love Me Tender.” Elvis became a lifelong fixture in Larson’s heart, especially his renditions of hymns “Amazing Grace” and “How Great Thou Art.”

In 1972, Larson began writing poems about Elvis, starting with “A Super Star Was Born.” She would go on to write 32 (31 technically — more on that in a bit) more poems about her favorite artist, all paying homage to his greatness and her high regard of him. Wolf, who started releasing her poems due to popular demand from customers, compiled her poems into a neat book, complete with bonus photos and tidbits.

The poems all have a sing-songy flow to them. Each stanza has four lines with the second and fourth line rhyming. The style seems a bit juvenile, with some of the lines nearly cringe-worthy, but most of the poems seem to work. While some lines sound like they were written by a teenager with a crush (it should be noted that she had an 8th grade education), I finished nearly every poem with a feeling of contentment. The poems run the gamut of his life; they discuss his birth in Tupelo, Miss., getting signed to Sun Records, his superstardom, marrying Priscilla, his live performances, his death and the impact his life and death made on this world.

Her passion for Elvis is clear with every word she writes, and it is one of the highlights of these poems. She holds him in a naïve high regard, constantly writing about the great person that he is. I love that he has the infallible, larger-than-life celebrity persona in her eyes. She doesn’t think of his human faults and weaknesses, just the love and joy he brought to her life.

There are 33 pictures of Elvis, taken by Wolf, to go along with the 33 poems. A good chunk of the pictures were taken when Elvis performed at the Providence Civic Center (now Dunkin Donuts Center) in 1974 and 1976. I enjoyed seeing these fan photos of Elvis performing, especially performing in Rhode Island (at a mere $10 a ticket). Other pictures include Graceland, statues in Tupelo and Memphis and ticket stubs. There is a thank you letter written to Larson from Minnie Presley, Elvis’s grandmother, sent after receiving a poem about her recently deceased grandson, and handwritten rough drafts of “His Beloved Graceland,” which shows the revision process. The book ends with a chronological list of Elvis’s movies.

“Couldn’t Help Falling in Love” was written by Wolf as Larson lay unconscious two days before her death. It’s written to wrap up the impact Elvis had on the lives of Larson and her family, with the message that she will see him soon. Though Wolf wrote it, it is in the same tone and voice of Larson’s other poems. Wolf believes that he was acting as a surrogate to get her final thoughts and feelings on paper.

Gramma Larson Remembers Elvis Presley is a great look into the mind of a fan. It’s a quick read with unique pictures that won’t be found in the other Elvis books out there. This will make a nice addition to any Elvis collection.

Ray Wolf will read from this work on Jan 29 at The Elephant Room in Cranston at 6:30 pm. Also reading that night are Thom Ring and Rachel McIntosh. Go to elephanttearoom.com for more information.