Into the Woods Is a Giant 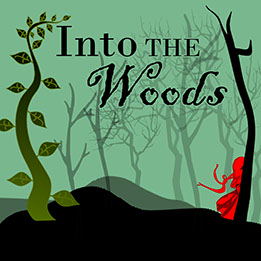 Into the Woods not only features a giant, but is one. However, Little Theater of Fall River’s production at the Firebarn co-directed by Aaron Gendreau-Visco and Deborah Sadler, takes this giant and places it into a small “black box” theater. These co-directors are successful in this feat through their sensible use of space and staging.

One of Stephen Sondheim’s most treasured musicals, Into the Woods has more recently been created into a Disney movie starring Meryl Streep, but it is not a show for young children by any means. It is a darkly witty show that invites us into the universe created by the Grimm brothers’ disturbing accounts of fairy tales. The first half of the book, by James Lapine, feels like a traditional fairy tale where all good defeats evil. In the second act you realize that in the real world life is still beautiful, but the harsh realities of infidelity, death and depression also exist.

The musical follows a childless baker and his wife, and their quest to break a witch’s curse, where they must journey through the mysterious woods to obtain a set of items for the witch. During their adventure through the woods, their paths intertwine with those of the characters from Little Red Riding Hood, Jack and the Beanstalk, Cinderella and Rapunzel. Sondheim’s score is, of course, tremendously clever and tricky with crafty wordplay and recurring themes that will have you singing pieces of the show for days.

This production was filled with astonishing performances. It almost feels wrong to single any performance out because in truth, it was sincerely an ensemble masterpiece. When the cast came together to sing, the real magic happened. Their voices blended Sondheim’s difficult score to a professional level.

Peter-Henry DaSilva and Erica Vitelli play the ordinary people in an extraordinary situation. They accurately represent a married couple and the highs and lows that come in any relationship. Their duet of “It Takes Two,” leaves you feeling hopeful for them. Both actors show tenderness in this song and their presence together is harmonious and pure chemistry. DaSilva’s voice is impeccable and Vitelli makes her character come alive through her facial expressions, which can only be appreciated in such a venue as Little Theater of Fall River’s Firebarn.
A highlight of the show was Jessalyn Sadler Correa’s performance as the Witch. Correa’s performance was second to none. She breathed fresh life into the role life with flair and had the audience on the edge of their seats baiting them on for the next strong belt. From “Prologue” to “Last Midnight,” she hit every note with passion and power, and her character exploded with humor and crazed physicality.

Some noteworthy songs included “No One is Alone” (sung by Cinderella), and the technically tricky “Your Fault,” which wove together the voices Little Red Riding Hood (Julia Morin), Cinderella (Holly Cardoza), the Baker (Peter Henry Dasilva) and Jack (Brian Barry-Perreira) toward the end of the second act.

Perreira was a crowd favorite whose very presence on the stage brought giggles from the mass. His voice was also quick and precise and extremely pleasant to the ear.

Cinderella (Holly Cardoza) is absolutely enchanting with her voice clear, warm and strong. She is able to riff Sondheim’s lyrics of “On the Steps of the Palace” as if it were a conversation with a best friend.

Both of the princes (Ryan Durkay and Tyler Rowe) brought the audience into roaring laughter with their pompous demeanors. Durkay also performed the creepy, uncomfortably provocative “Hello Little Girl” in the role of the famished Wolf with clear intonation and a booming voice.

The set design was minimalistic with an amazing use of the small “black box” theater space. Each individual fairy tale was distanced from another through the use of small theater drops on clotheslines that the cast actually removed and replaced to delineate space. The ability to have so many moving parts in such a small area was remarkable. Aaron Gendreau-Visco, who co-directed, also handled the set and costume design.

The music of Sondheim resonated from above the theater with a marvelous 10-piece orchestra led by the musical director, Michael Coelho.

Cinderella’s prince sings in the second act that “Every moment is a moment when you’re into the woods.” The Fall River Little Theater’s production makes you never want to leave this moment or the woods. Its intimate performance is vibrant and flawless. Each performer has well-defined their roles and the vocals will make you feel like you are watching a Broadway performance. This is a “moment” you don’t want to miss.

Traditional or Technical School: Which Is Better?

Following the Yellow Brick Road to Theatre By The Sea