On Posted on August 19, 2015 by Editor2 to Events, Fine Arts, Things to do in Providence
Events

Artists Run to East Providence for The Looff 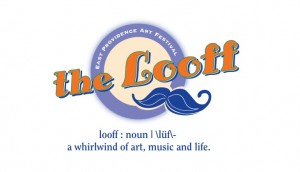 East Providence Arts Council is launching their inaugural arts and music festival, “The Looff,” on August 22 from 10am – 8pm in Riverside. You might be asking right about now: What’s a Looff? Like, the thing you use in the shower? No, not even close.

“We wanted a real brand for our festival, like Bonnaroo or Burning Man,” said Rick Lawson, the council’s chairperson. The name comes from Charles Looff, designer of the historic carousel that lives in the festival’s location, Crescent Park. Looff’s grand mustache also inspired the festival’s cartoonish logo, which functions as a quirky illustration and an underline for the festival’s name. Lawson wanted to build a real identity for The Looff by creating an event that was unique, eclectic and something the area sorely needed. A musician himself, Lawson has lived in East Providence his whole life. He founded the council in June 2014 after years of seeing squandered artistic potential in the region. “We’re right next to the capital, next to a waterfront park and it’s underutilized.”

A councilwoman’s suggestion to start a committee for the arts served as the catalyst for the whole movement. That December, Lawson rallied a committee together to begin planning for their first festival. The Looff has drawn more than 70 artists, including musicians, an Elvis impersonator, belly dancers and craftspeople. Gathering such a motley crew was all part of the committee’s plan to create an event that Rhode Island-ers could set apart from the other art fairs. How did they manage to gather so many artists, you ask? Pure grass roots campaigning. “We started with people we know, then turned to social media and then Craigslist.”

The festival is intended to help launch other initiatives that the council plans to host throughout the year. The council also hopes to acquire a space for hosting art galleries and theatrical performances. Lawson spoke reverently about creating an educational arts program for the community, one of many ideas that The Looff could help fund. Another larger scale initiative plans to build a network and community for local artists, creating a space for people with similar interests and values to learn from each other.

“I see The Looff being, if not nationally known, than at least regionally known,” Lawson said in regards to where he sees the festival heading in the future. “I want to use arts as an economic driver for the city.” The hope is to draw a wider crowd, possibly bringing in artists from around the country and hopefully pulling in tourists as well. “The artists stay in hotels, eat at local restaurants, tell their friends about us. We could bring in money for the city.”

Arts vendors and food trucks are open for the duration of the festival, and below is the line-up of musical acts.

The Looff Performer Line Up:

Gettin’ Bendy with It: Can yoga help reduce anxiety?