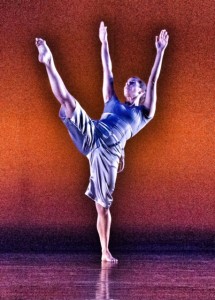 A native Rhode Islander for over three decades, I sat for the first time in my life in the Bishop McVinney Auditorium for a dance concert on Friday night.  I was there to experience the Fusionworks Northeast Choreographers Festival (NECF), a new project dreamed up by artistic director Deb Meunier and her hardworking board of directors and administrators. The premise of the project was to provide opportunities for regional choreographers to set their work on RI’s 29-year-old modern dance repertory company, while offering master classes, school performances, and open rehearsals to the community; and to be open and inviting to all, keeping the often allusive form of modern dance accessible to anyone brave enough to enter the space it is happening in. I was a bit anxious about the most recent relocation of a concert dance venue, another sign that our city desperately needs a performance venue that is appropriate for concert dance work. I fidgeted in my seat and hoped the dancers backstage were able to enjoy comfortable dressing rooms and a forgiving dance floor. When Deb Meunier greeted us, as she does so warmly and with open heart at every Fusionworks concert, she invited us to look around. I was happy and relieved to see that it was a good crowd. Folks had found their way to this new venue and were happy and excited to see what would happen when the curtains opened. Dozens raised their hands when Meunier asked if this was their first time at a Fusionworks show. At last, it was showtime.

The program opened with Self Disruption, choreographed by NYC’s Winnie Berger and danced by seven of the company’s 10 dancers. I found the work unsettling. It resonated with the feelings of anxiety and stress that seem to permeate all of us, particularly during the frenzy of this election season. The piece began with soloist Devon Larcher, the company’s sole male-gendered dancer, dressed in a dark grey and purple structured design by Jannah Pederson, and delicate sounds of piano in triple time. As the sound score added more voices, layering compositions by Alt-J reminiscent of Imogen Heap and Bobby McFerrin, dancers compounded the space, arranged in groupings that effectively produced feelings of contrast and isolation. The dancers moved quickly, repeating nervous head nods, gesturing to their heads and abdomens, grabbing their ankles close to their heads then letting go, riding out continuous rebounding arcs of tension and slack. The abrupt ending of the work only added to the feelings of anxiety, confusion and aggression the movement had stirred up within me. And then I just had to sit with it.

Continuing along this dark reflection on contemporary life, I was pleased to see RI choreographer Annamaura Silverblatt’s The Metamorphosis on the program next. The dance is based on the beloved story by Franz Kafka, now past its centennial anniversary and still full of poetic inspiration, which Silverblatt masterfully crafts into a delightful ballet she dances with Fred Silverblatt, and Nancy Reed. Reed is assuming the role of Gregor, disguised as a man with her long hair drawn tightly into a low bun and wearing dance theater’s iconic “business man” attire: white shirt, tie, slacks, suspenders, blazer. As the frazzled door-to-door upholstery salesman throws himself before us, begging on his knees and frantically showing his wares, his mom and dad sit comfortably snug together on a bench upstage left, reading the newspaper and stitching a needlepoint. As the first movement closes, the transformation from man to bug is brilliantly foreshadowed as Gregor loses his feet and crawls off upstage right while mom and dad make their way off to bed on the other side. In the second movement, our hero  scuttles back into the space, now dressed in brown and black with face, hands and feet masked. Gregor has become a bug, and his parents react to him with a horror and disdain that is quite amusing. They try to shoo him away, thwap him with the newspaper and eventually decide to pull the bench over his limp body and put on their nice hats and coats and step out for the day.

Methodical Exchange, choreographed by Rhode Island College Assistant Professor Jessica Pearson and danced by the impressive Fusionworks II company, featured percussive and vocal music by Mickey Hart. The dancers, ranging in age from 12 to 18, displayed an impressive facility for Pearson’s strong and dynamic movement vocabulary. They lunged and swung their arms and quickly fell to the floor and rose again while moving through formations that poured and flowed pleasurably through the space.

The inherent eroticism of the iconic Adam and Eve story played out through New York choreographer Lane Gifford’s The Garden. Archetypes for Adam, Eve and of course, the Snake, play out the familiar story as the sound shifts from pulsing electronic music to old-timey stomp jazz. The “Adams” take the stage, giggity-giggity thrusting their chins forward in bird-like motions that remind me of Will Farrell and  Chris Cattan in the late ’90s SNL nightclub skits.  The “Eves” take the stage next, introduced by Sheramy Keegan-Turcott and Courtney Asselin, who master their roles. They seem to have their own gravitational pull as they seduce us with a strong, grounded, oozing procession toward the audience. Next, dozens upon dozens of apples roll across the stage as Amy Palmieri Burns evokes the Tree image. A few choice apples are saved downstage for perhaps the most provocative imagery of the work, a sensual and inherently violent duet between Larcher and Brittni Laquidara-Forkey, in which Forkey places a forbidden fruit in her own mouth and presents it to Larcher, who simultaneously takes a bite and the two are joined at the mouth in a series of vignettes that arouse images of power, submission, temptation and acquiescence. All this as a chorus of four dancers reprise thematic movements in unison, eventually accumulating into a gesture line as the duet gradually disintegrates and the full cast stands downstage right, apples in hand, and slowly each dancer raises the fruit to their mouth and they all take a bite.

Fraternity, choreographed by Gierre Godley of NYC, brought back the familiar image of the iconic “business man” we saw in The Metamorphosis. The work included four women and one man, seated in five chairs across the upstage corridor, donned in black slacks, white collared shirts, and black sports coats. The gendered implications of the title and mixed genders of the dancers made it a little confusing to grasp at the intended meaning of the work, placing me in the happy place of generating lots of interesting questions that I enjoyed ruminating on as I watched the dancers move through a series of competitive and aggressive pushes, pulls, lifts and falls. The piece begins with all five dancers seated and with dead-pan expressions staring straight ahead. Larcher, seated in the center, melts down the chair and onto the floor. He regains his feet, rising triumphantly like a phoenix out of the ashes, and circles one leg in a slow, controlled circular pathway around his own body. A small voice behind me whispers, “I wish I could do that,” and I am reminded of the transformative power concert dance has on those of us who are fortunate enough to experience it as children. The work goes on, with a feeling like The Matrix brought about by the costumes and the music by Loscil. Alliances seem to be made only for the purpose of ganging up on other factions and we are in a world where every wo/man is out for themself. Melody Gamba brings technical precision and emotional execution to the work that establishes her as an anchor in the company, her razor-like gaze cutting through the fourth wall and all the way out the doors of the Bishop McVinney auditorium. Duets and trios emerge and fold back into a moment of unison as the dancers return to the chairs, turn to face us again, sit and stare dead ahead as they began, wiping away the pain and struggle of being part of this club they are in with one gesture of the face.

Phoenix-based Jenny Gerena’s HE(i)R contrasts Godley’s work in that it presents an all-female cast, now donned in iconic goddess-like dresses that are draped and twisted around their torsos and spill into full floor-length skirts of warm golden tones. The work is decidedly female. Their movements are voluptuous as the network of women progress from the upstage right to the downstage left areas of the stage over the span of the work. They are constantly in support of one another, falling, catching, lifting, holding. The title suggests to me the familial relationships between women; as mothers, daughters, grandmothers, sisters, aunts and cousins. An impressionistic work, it left me thinking of the evolution of women’s issues and the ways these matters have been lived out through women in my own family, and then how they have played out in the inter-generational relationships between us.

The ultimate work of the evening was Meunier’s own And That Ain’t All, featuring jazzy orchestrated music compositions by Takashi Yoshimatsu and costumed in opulent party attire in purple, blue and green. This piece is a pleasing good old romp, the sort of fun dip into romance and comedy that Meunier is great at making. Having seen its premiere in 2015, I felt a tinge of sadness that I would be missing the male role’s originator, Davide Vittorino, whose mastery of subtlety and aloofness paired with Gamba’s unconcealed desire really made this piece incredibly funny and sexy at its premiere. Larcher is fully capable of physically performing the movements, and he lowers Gamba as she falls sideways to the floor with such strength and coordination that she appears to be made of paper. There also are welcome choreographic moments when Larcher is supported by his female dance partner, and both dancers turn, leap and fall, equally subject to the same laws of physics, in unison. You can’t help but chuckle as Forkey and Hannah Riggs scurry across the stage in a weirdly 2-dimensional tangle of limbs that resembles a Picasso painting and hit just the right beats on the music. This piece is deeply satisfying, the perfect dessert after an evening of contemplative and emotional explorations. Like one of Marina’s cookies. And if you don’t know about Marina’s cookies, I suggest you make it to the next Fusionworks concert so you can take a bite for yourself.

The Healing Power of Light

Life and Dance with Bill Evans

Your Guide to Contemporary Dance Events This Spring