Need a Lyft?: One driver’s experience as a sorta’ taxi 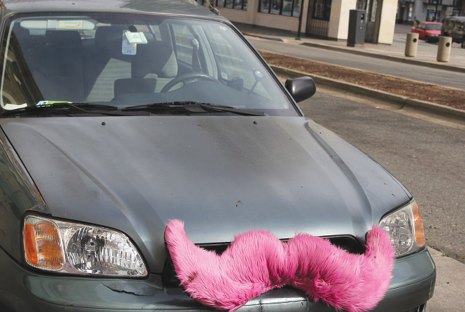 On a spring afternoon, I’m off work but I’m working on paying for my car. The Lyft Driver app’s pink destination dot steers me toward a neighborhood not far from my own. I pick up a high-school-aged girl. The app chimes in to tell me it’s a two-stop trip. Stop number one is a shopping plaza a two-minute drive from the house.

“You know where the Subway is?” she asks from the backseat. I find my way to it. She hops out of my car and into line. Before too long (but really waiting outside a Subway makes time feel like it’s going extra slow) she comes back out and gets in my backseat, bringing a paper-wrapped cylinder that oozes the unmistakable scent of meatball marinara. The second stop is a back to her doorstep.

This trip nets me about $3 and costs her a little more than $6. It doesn’t sound like much, but it’s part of a slow accumulation of income that helps me make my car payments. I’ve had a group of giddy, wine-drunk 40-somethings leaving Dan Savage’s homemade smut film fest (Savage did not show up), a French intellectual who zonked out the entire way to Logan, and, on Easter Sunday, a man and his particle board making his way to a mid-afternoon respite in the complex of adult entertainment facilities on Allens Ave. I’ve waited outside two Family Dollars. A toddler with a Tupperware full of food (horrifying!) told his mother, “l love you,” just because he had recently secured command of that vital phrase. It’s a few anecdotes and extra money, not much more.

For many, though, it’s their only income, and they want more. A coordinated strike of rideshare drivers across multiple platforms took place in May with more are planned soon. Uber’s blockbuster IPO raised billions, but those who work from daybreak ’til when their cars break won’t get much. Uber’s plan for making real deal money for themselves involves gutting bonuses for their drivers. Real earnings are hard to calculate, but the figure is thought to be about $10 an hour after all expenses for those behind the wheel. That’s lower than RI’s minimum wage, and it doesn’t come with much in the way of benefits.

I participated in the strike by not driving that day, but I can’t pat myself on the back too much. I wasn’t planning on hitting that toggle anyway. I also wasn’t looped into any online groups on Facebook or other chat platforms, which is how these things get coordinated.

Rideshare drivers have no true union of point of congregation in the way traditional taxi drivers do. They meet online to plan their strikes. Whether cutting off service in a few cities for a few hours is going to change anything is hard to say, but it brings some hope to labor organizers and the drivers they represent. Though this problem may be one that solves itself, at least for Uber and Lyft.

Self-driving buses have appeared on PVD streets. Even after killing a pedestrian and accusations of stolen intellectual property, Uber is moving toward autonomous vehicles. Alphabet and Apple are reportedly way ahead. Lyft is in there somewhere (hopefully far behind in my case). Robots don’t need to take care of them and their own. They just need know where they’re going.