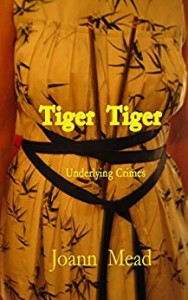 Tiger Tiger is the second book in author Joann Mead’s Underlying Crimes series, though the books aren’t connected in any way other than the biological theme of the series. Mead is a science teacher who also works in the biotechnology and medical research fields, which gives her writing a sense of realism and terror. This book serves as a sobering reminder that there are people who thrive on destruction, and you never quite know how a scheme of chaos and destruction could play out or when.

The book’s character Mei grew up in Shenzhen, an urban village in China. She watched her mother work as a maid to support her. Her father died when she was young, and her mother placed importance on Mei receiving a good education so she didn’t end up in the same situation. Mei also secretly learned how her mother was earning extra income, and used these lessons later in life to help her manipulate men into getting what she wanted. Mei’s favorite mantra was “Work hard, get rich.”

Mei became a scientist, working in a lab at World Genomics. She tried to grow professionally, but knew other ways to get ahead, whether it be for more money or to further her education. She meets Kahliy, a teacher with a boatload of various passports, an unusual backstory and a certain charm that he uses to his advantage. The two work out a plan to unleash the Tiger Flu, a super virus that will wreck absolute havoc wherever it is unleashed, which is (big surprise) America.

The story plays out like a beach read. There is plenty of sex for lust, money and manipulation on both Mei and Kahliy’s part. It’s interesting to see how each use it to their advantage, both with each other and other people. I’m not usually a fan of reading sex scenes, but Mead used them in a way that was necessary to move the plot along.

The part of the story I liked best was the bioterrorism aspect. It is clear that Mead is knowledgeable of the subject, and she uses this to write something absolutely terrifying and realistic. Mei creates the Tiger Flu and tests it on a couple of unsuspecting guinea pigs, while Kahliy plots to release it to the public via terror cell. Everything seemed well-planned and nearly foolproof, which sent shivers down my spine. I’m as fascinated as I am scared of this subject, and Mead thoroughly portrays both what could happen and how it could happen.

There are parts where the storyline is choppy, and some of the dialogue is cringe-worthy. It follows Mei for most of the book before abruptly starting to tell Kahliy’s backstory (this starts “Part 3”). It took me away from the story a bit, though I found the part that focused on him to be the strongest section. The story also shifts at times to Jo and Jeremy, who are pseudo detectives living in Rhode Island trying to piece together what happened after learning about Mei’s test subjects. While I found their presence interesting, it didn’t seem necessary and their payoff was a little disappointing.

It took a bit to become fully invested in the story — it didn’t become a page-turner for me until about halfway through; however, Mead crafts a well-thought-out story that is based in realism and what-ifs.  Fans of this genre would consider this a fun and interesting read.