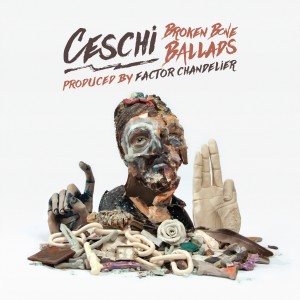 When it comes to the world of independent underground hip-hop, there are few who can match the uniqueness and originality of New Haven, Conn-based artist Ceschi Ramos. Combining rhymes with tinges of both folk and indie rock, Ceschi is a musician who is never afraid to push boundaries in both genre and style. It couldn’t be more evident than with his brand new release, Broken Bone Ballads. With tracks that come straight from the heart as well as the mind, Ceschi educates and entertains in unison.

These days, when modern hip-hop is all enamored with big beats and cocky, arrogant lyrics, Ceschi brings a new take on the old school with most of his songs adorned with acoustic guitar chords and meaningful lyrics that stay with you. Whether it’s about the government, society or even the struggle we all know as life, all cylinders are hit on every angle possible. Ceschi crafts his music in such a real and genuine way that it’s very refreshing. This isn’t your typical hip-hop album, and we should all thankful for that.

Get with the grooves, the rhythms and the vibes. What you need to tap in to your inner music snob are my top tracks in the Album Of The Week. It won’t make you better than anyone else, but it’ll show you what’s good.

An excellent collaboration with Providence hip-hop and slam poetry legend Sage Francis, “Barely Alive” has a catchy, simple chorus combined with epic tones and hard hitting rhymes.  The best example of Ceschi keeping things real, “Say Something,” is an honest commentary about friends, the world, society and the apathy that has invaded it all. I absolutely dig the emphatic backing beat on “Beauty For Bosses,” a head nodding jam that anyone can get down to.

Currently Ceschi is over on the West Coast where his next show will be at Kelly’s Olympian in Portland, Ore. Since he’s an artist based in New England, stay confident that he’ll be making his way back to Providence in the near future. Until he takes the stage at your friendly neighborhood music venue, grab a copy of Ceschi’s Broken Bone Ballads. It’s music straight from the heart that’ll enlighten your soul.