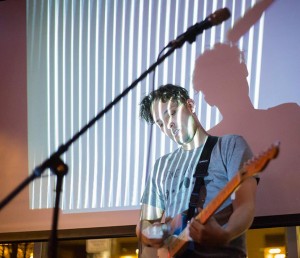 An electronic act recently started in The Creative Capital that has the potential to get a buzz going in 2016 is Bellerophon, the brainchild of musician Mauricio Ossa. Ahead of the band’s show at Dusk on January 16 with Attleboro synth rockers Cat Has Claws and fellow electronic act Favourite, I had a chat with Ossa about how he ended up in Providence from Chile, his punk rock roots and what Bellerophon’s plans are for the rest of the year.

Rob Duguay: For starters, how did you end up in Providence? You’re originally from Chile, you went to school in Miami and now you’re here.

Mauricio Ossa: I went from Santiago in Chile, my home city, to Miami and I stayed there for a while. Then I realized that I wanted to do more things with music so one day I packed everything, picked up my bass and went to Montreal. A lot of good music was coming out of there at the time — this was 2007. I was following a lot of the bands that were in that scene.

RD: You had Arcade Fire.

MO: You had Wolf Parade, Tokyo Police Club and all of these other bands. It wasn’t really anything new and it was recycled, but there’s something different about those bands. When I went there I just had my bass, a cable and nothing else to play with, barely any money, so then I realized that I had to get back to the States. So I signed up for school at Johnson & Wales and that’s how I ended up in Providence. From Providence I kind of ended up moving to other places but coming from Montreal to Providence was pretty surreal. At the time I hadn’t lived in the States for around three years and then I just moved to the East Coast. Everyday it kind of shocks me a little bit that I live in Providence because it’s really random. I’ll ask myself “How am I here?” But it just happened and that’s pretty much the whole story.

RD: Providence is one of those places that if you stay around here long enough you kind of don’t want to leave. You want to stick around and see what’s happening next. What was it like for you growing up in Santiago? Were you exposed to a lot of music?

MO: Yeah, it was amazing. Actually I had a band there, we started as a sort of pop punk band and it was fairly popular. We would do shows where we would cover Millencolin songs and a bunch of other Swedish punk bands we listened to. We’d have a small draw, like 200 people and all that stuff. We started getting really into it, writing our own songs and leaving the covers behind. Then we had a transformation in the early 2000s where we had to go emo. It was new and fresh at the time and those haircuts were new and everything. I remember when we used to do shows together and we’d release demos and stuff like that. This was before Facebook was big, so we would put posters all over the streets and hand flyers to people. We would play shows with friends who had bigger bands and we would open for them and that was the first time I played in front of 1,000 people.

RD: What was the name of the band?

MO: It was called Eimy, pronounced like the girl’s name. We still have videos on Youtube from back then that have 250,000 views. It was really cool growing up because it wasn’t short of any city you could play in. If you wanted to do a show and you had a little bit of money you could just do it. Take the bus or the subway and you’re still in Latin America so there’s still a Latino culture, but you’re influenced by all the outside things. I guess that’s why it wasn’t hard to move to the States because there was already that culture infiltrated into it.

RD: You’re already listening to the music from the States so it wasn’t that hard to adapt.

MO: We didn’t sing in English, we sang all of our songs in Spanish ,but there was still a heavy American influence.

RD: Bellerophon has a synth pop sound that’s completely different than punk rock. What made you want to go that route when you started this band?

MO: Well, two main things. The first one was that I took a long time off from music so when I got back into it I felt like I had to do something and I just did the same thing again. I tried to replicate the band that I had before and you can’t just do that. Eventually I started shifting toward music that involved looping and things like that, stuff I could just do on my own. The first thing I did was get an old school machine but it’s kind of shitty, it’s a Roland MC-303. It’s a synth and you can put compressions, but it’s not analog or anything.

RD: Fatboy Slim did a song called “Everybody Needs a 303.”

MO: There’s a bunch of stuff that’s been done with a 303 and I started getting into that. I used to listen to bands like The Knife and LCD Soundsystem and I thought it was really cool because it’s the same harmonies but they’re all mechanized. People in those bands play instruments on top of that and it made me want to try it. I naturally moved away from acoustic instruments, full drum sets and vintage amps to instruments that wouldn’t require as many people, but with the same energy of what I did before. In the beginning I tried adding members but then I realized that I couldn’t work with other people so I just took it all on myself. I find comfort in music that is acceptable but still challenging. It’s all real instruments with a sample and I feel that it’s a natural evolution. Before I wanted to be in a band with people and make music together, and now it’s just a sound that I want to show to people.

RD: You see that happening a lot lately with musicians who’ve been out of bands wanting to do something by themselves, and with technology today you can do that with loop pedals and different kinds of software. You can make anything on a laptop these days.

MO: Say you have a project that you start on your own and you put it out yourself without the help of anybody. It’s just your sound, and if you bring other people into the fold they might change it completely. If you really want to stick to the way you sound you have to go independently.

RD: Absolutely, just do what you want and not have to deal with anybody else.

MO: When you’re 21 you don’t have anything to care about so you’ll more likely want to be in a band. You’ll start caring about other people’s decisions and then life starts getting a little more fast paced and you’ll want to just do things for the reasons why you want to do them.

RD: Very true. As of right now, Bellerophon only has a demo out. Can we expect an actual EP or album in 2016?

MO: Well I just started collaborating with John DeTora from JD Holiday on a new EP. We did some recording at Machines With Magnets and that’ll be out within the next few months. It’ll be six songs and it’s coming together pretty nicely.