Daydream’s Newcastle Is All In Your Head 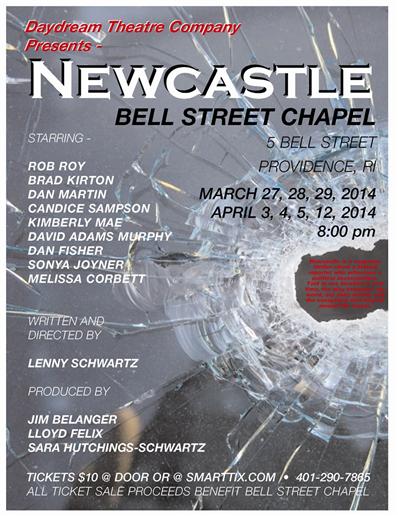 At the end of every Lenny Schwartz show, just as the house lights come up, one inevitably hears, “Well, that was different!” Opening night of Daydream Theatre’s latest Schwartz original, Newcastle, was certainly no exception. Known for his biographical extravaganzas (i.e., Lucy, The Brothers Marx), Schwartz also pens originals that both entertain and bewilder as his bizarre flights of fancy are often colorful wrappers for intense sociological debates. It would be all too easy to dismiss Newcastle as a Manchurian Candidate knockoff, but Schwartz takes the basic idea of the brainwashed political assassin and kicks it further into left field. The premise puts a tabloid journalist, Mark, in the middle of a political assassination that seems straight out of another classic, Blow Up, where an incidental photograph seems to show a murder in the background. Mark discusses his suspicions with a co-worker who immediately turns out to be part of the plot and Mark, seemingly out of nowhere, disarms and dispatches his colleague, stuffing him in the closet where we suspect his corpse will pop up again at some point (it does). The wheels are set in motion for a story of conspiracy, anti-government plots, extramarital affairs and slapstick. Yes, slapstick, for this is how Schwartz both defuses tension and turns everything on its ear. Newcastle plays like Noises Off as written by Tarantino by way of Mamet. Doors slam, dry witticisms fly and severed hands are bandied about all while the nature of the conscious and unconscious mind, destiny and the role of change agents are debated in earnest. If that sounds intriguing to you, then Newcastle is worth it just to see how it all turns out. No one can guarantee that you won’t be frustrated or confused, but, at only 75 minutes and one of the lower ticket prices going, Newcastle is worth it if you’re looking for a blend of the familiar and the unknown.

As Mark, Rob Roy is a tasteful blend of manic and reserved, deftly riding the peaks and valleys of Schwartz’s creation and delivering a wonderfully physical performance. The opening tableau delivers the repeated manifesto of Mark’s anarchic subconscious, where “the poison wells up inside you.” Mark is in constant inner (and outer) turmoil throughout Newcastle, whether through his own making or due to a cascade of external forces that quickly spiral out of control. One could make the case that the events of Newcastle may, in fact, be entirely figments of Mark’s imagination, which makes the ending even more poignant. In fact, there may be ample evidence for this theory in the fact that the only characters who seem to truly have any affection for him, his mistress and his secretary, are the least distorted and written to elicit our sympathy far more than, say, Mark’s wife, Mia, who gets a classic Schwartz line, “We’re registered Democrats. Why do you have a gun?” Once Mia storms off in a cloud of divorce, what already seems like an untenable situation unravels even further as we meet FBI agent Maccabees.

Maccabees, played with an unnerving charm by Brad Kirton, arrives at the height of Mark’s dilemma and never leaves, toying with Mark and goading him on to either admit participation in the assassination or prove otherwise. It’s a cat and mouse game from the beginning and Maccabees’ agenda seems more focused on playing with Mark’s head and goading him into remembering his “programming.” Once again, we’re tempted to believe that Maccabees may be Mark’s Tyler Durden, as his attempts to prod Mark into admitting his role become more and more political paranoia (the name Maccabees alone conjuring up a symbol of anarchy and upheaval that is as heavy handed a symbol as it gets). Kirton is all smiles and menace, a David Lynch character that divides and multiplies as his partner Gwen (Sonya Joyner) arrives to help tag team Mark’s quickly unraveling brain.

Newcastle essentially becomes Mark’s struggle to keep all of these forces at bay. As the knocks on the office door become more incessant, a new thought to deal with, we see Mark attempt to place everything and everyone in context, even as the body count piles up. Mark warns his tormentors, “I’m one moment away from losing it all and causing violence.” The reply is an obvious, yet still chilling, “Aren’t we all?”

The Fight Club comparison holds true for the sheer amount of physical violence onstage as well. Newcastle is awash in some of the more original and believable fight choreography (delivered here by John Lincoln) that’s been seen in a while. Lincoln has his actors all over the stage, up on desks, bouncing off walls and unafraid to use non-weapons as killing tools. Once again, even some of the doubling of Mark/Maccabees can be seen in moves such as jumping up and over desks (although Maccabees would explain that away by reminding us that he and Mark received similar clandestine training by murky paramilitary forces). In a space as small as Bell Street Chapel, it is even more impressive that these fight scenes ring true, but they are plagued with what seems like the curse of the RI Theater prop world: no one can seem to find a stage knife that doesn’t look a part of a pirate costume from iParty.  That aside, Newcastle is brimming with action, whether or not that action may be only in Mark’s fevered brain.

The theory that Mark is a paranoid schizophrenic with a military background whose disease has progressed him to the point of murderous plots and rapidly multiplying delusions may be just as far-fetched as the accusations with which Mark himself is faced. Perhaps Newcastle is meant to be taken at face value and Mark is indeed a wired patsy programmed to kill at the drop of a keyword, and events have been set in place to destroy the government and usher in a new era of anarchy. It works either way or even both ways, for Lenny Schwartz has invited us into his head once again and it’s always tricky in there.