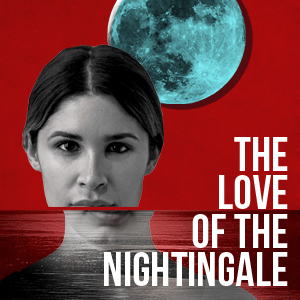 There are some experiences that are so painful they find a way to sink into our souls. In The Love of The Nightingale, the darkest parts of human nature are laid bare in the world of ancient Greece.
Playwright Timberlake Wertenbaker has created a harrowing portrait of the battle between the sexes, adorned with symbols of Greek mythology.

We meet two cheerful and free-spirited women, Procne (Olivia Khoshatefeh) and her sister Philomele (Nicole Villamil). They talk about love and sex as war rages all around them. Their father, Pandion, the King of Athens, allows Tereus, the King of Thrace, to marry Procne.

Procne finds herself unhappy living in Thrace and summons Tereus to travel to Athens and bring Philomele back to her. While on his ship, Tereus becomes infatuated with Philomele. He tells her Procne has drowned in order to wear down her defenses. When she resists his charms, Tereus rapes her.  That act sets in motion a chain of progressively shocking and horrific events, which I will not reveal here.

Director Caitlyn Ryan O’Connell has devised some imaginative staging in a tight 90-minute show.
The performances are top-notch, especially Villamil and Khoshatefeh, who are always convincing.
George Olesky brings a subtle menace to Tereus, who brushes off his atrocities against women as a matter of simply defending his honor. Alex Woodruff is achingly poignant as Niobe, Philomele’s chaperone. Nick Griffin delivers a nicely unaffected performance as Phrocne and Tereus’ young son, Itys. Lee Osorio, Tim Kopacz, Peter Martin, Jessica Ko, Griffin Sharps and Sarah Leach play members of the Greek choruses, who provide narration and commentary.

This is not a play for the squeamish. The last 25 minutes are some of the most intense theater I have experienced all year. It is unremittingly grim. Please do not bring your children.

The Love of the Nightingale can be interpreted as a feminist fable. It features themes of revenge, male chauvinism and empowerment. The tragic choices made by the characters arise from recognizable human frailties.

Although the story takes place many centuries ago, the brutalization of women continues today, in many forms. How and if we can end that type of behavior remains to be seen.