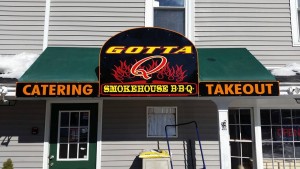 At just over 5 feet, 9 inches tall, I currently hold the prestigious title of “Tallest Villari in Recorded History.” This, of course, is according to my father, Bobby Pastrami, who considers my half-foot advantage over him to be a definitive piece of evidence for his otherwise unsubstantiated claim. Another oft-cited “fact” being, “this is the first time in recorded history that three generations of Villari men have been alive.” Considering my grandfather passed away before I was born, as did my father’s grandfather before him, there may be greater truth in this latter statement. Without a doubt, the co-existence of Pastrami, myself and my son has certainly led to many firsts for our family.

“Ahhhh, bahbuhcue joints,” rumbled Pa-Pastrami, as we greeted him in his living room. “I am sorry, I did not get that,” responded whatever the Droid equivalent to Siri is. “Arrghh, BEE-BEE-CUE!”

“Why not just search it?” I offered, but my suggestion was abruptly dismissed by a more deliberately articulated “Bah – buh – cue – in – Roe – dye – lin.” This last attempt finally yielded results, as typically web-based as they were: Texas Roadhouse, Wes’, Rick’s, the now defunct L.J.’s and Mama Kim’s. Pastrami proceeded to read from one menu – aloud – through his now thoroughly moistened jowls. “What the hell is chicken-fried bacon?” he asked me and my son – both of us strict vegetarians.

“I would assume bacon, fried in a chicken batter(?)”

If for no other reason than the pool of saliva that had accumulated on the inside of his mouth, we surrendered our advantaged 1.5-to-1 vedge-to-non-vedge ratio for what clearly was a unwavering cravering. BBQ it would have to be.

What Pastrami did not know at the time was that I had a card up my sleeve. A once truck-only business recently set up brick-and-mortar shop, just a few miles north, off of 146. Nestled in the once quaint mill village of Albion, between the Blackstone River and Kirkbrae Country Club, Gotta Q offers many traditional selections, either as 1/2 orders/sandwiches or as full plates. From the baby backs to brisket burnt ends, plates come with a choice of two soulful sides and garlic toast. Q’s owner and pitmaster, Michael Strout, is of the Memphis school – dry rubbing his pigs and cows before slathering them with a vinegar-based sauce, while they rock on that slow and low tip.

The Xerox-copied, single-sheet menu prominently features a caveat – “NOT ALL MENU ITEMS ARE AVAILABLE EVERY DAY.” Mr. Strout makes what he wants, when he wants to and when he sells out of a particular item, you just have to order something else. This is precisely how small businesses should be run, with patrons either getting it or going somewhere else (my words, not his).

Pastrami opted for a pulled pork sandwich. It was served on a nice hamburger bun, topped with cole slaw and packaged in an essence-containing styrofoam clamshell. Surprisingly, there is one cruelty-free offering. The entirely devoid of animal byproduct, collard greens, like all sides are available in 8 oz. and 1 lb. portions. Unfortunately, the greens were not available on the day that we visited, but my father was able to sing high praises for his sandwich – particular in the areas of flavor and mouth feel.

I should probably note that all of the restaurant-specific information provided here was given to me secondhand by my father, who I sent inside to gather data.  You see, my son fell asleep on the way up to Lincoln and my parental responsibilities forced me to stay within reach of the snoozing pie in the backseat. Perhaps one day soon will allow us to check off another Villari first – BBQ lunch – with all the smoky (and hopefully green) goodness that Gotta Q can provide.

Art Studios in the Wilds of Pawtucket

How to Stay Cool (Without Losing Your Pants)

PROVedge: Some Things are Better Left