Interview with Tosin Abasi from Animals As Leaders 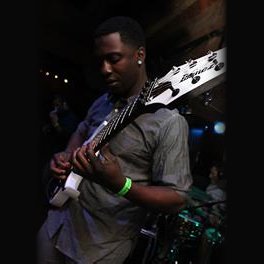 Despite the constant changes in music within both the industry and the sound, one thing that has always stood strong is the art of playing guitar. On Sunday, May 8 at the Providence Performing Arts Center, Generation Axe will be taking the stage, featuring the virtuoso Steve Vai, heavy metal badass Zakk Wylde, Nuno Bettencourt from Boston rock legends Extreme, symphonic metal master Yngwie Malmsteen and Tosin Abasi from instrumental progressive metal act Animals As Leaders. It’s a stacked night filled with various talents that’s bound to shred the PPAC into pieces.

At the age of only 33, Abasi has risen to be considered one of the forerunners of a new breed of guitar wizards. Stunningly complex and emphatic music are his trademarks and the music he writes is contagious. Ahead of this weekend’s show I had a chat with Abasi about moving from the East Coast to the West Coast, playing with eight strings, being affiliated with genres, the advantages and disadvantages of being a self-taught musician and what the rest of the year holds.

Rob Duguay: You grew up in Washington, DC and now you live in Hollywood. What to do you find to be the major differences between living in both cities?

Tosin Abasi: The weather. I didn’t realize winter was optional until I moved to southern California and nowadays I find it very hard to opt back in.

RD: Do you find the people to be different?

TA: The types of people who live in DC, in my experience, are people who are definitely pursuing a career in politics, government or nonprofit work. I think DC has the highest number of advanced degree holders per capita than any other city in the country. I could be wrong, but I’m pretty sure that’s true. People-wise, you get a definite vibe that it’s a community of intelligence; there’s definitely less of the crazy artist fashion thing and way more of the academic vibe, which is less my vibe.

RD: One of your trademarks is that you play an eight-string guitar and sometimes a seven-string guitar. Are all your guitars custom made and what do you like about playing more than the standard six strings?

TA: Not all are custom-made; I have a signature eight-string guitar through Ibanez called the TAM 100 and I also have one called the TAM 10, which is a slightly lower tier eight-string. I do have a lot of custom instruments and having more strings affords me the ability to voice chords, extend arpeggios and utilize bass techniques and tapping in a way that a six-string guitar wouldn’t really lend itself to. It’s become essential to my style.

RD: You’re also a self-taught musician. By playing with multiple strings and being self-taught do you find yourself having more creative freedom when writing new material rather than abiding by basic formulas and structure?

TA: Yeah there’s a degree of freedom that comes with being self taught just because I develop my own interpretations of the fret board and how it’s all working. With that being said, there’s a freedom that comes along with understanding the fret board and understanding how chords are constructed. At a point I felt that I was limited due to the fact that I was self-taught, so I went to a music school for a year in 2006 at the Atlanta Institute of Music. That definitely made me feel a little bit more free because I wasn’t really experimenting as much as I was combining experimentation with a bit of understanding as well.

RD: You’ve been affiliated with the Djent genre, which is a style of heavy metal that incorporates a high-gain, palm-muted, low-pitch guitar sound. Do you identify yourself with that label at all or do you try to distance yourself from all of that?

TA: None of that is important to me, I don’t really care what you call it. I don’t think we fit very neatly into a genre, especially with the newer material we’re working on. People can call it whatever they like.

RD: The music of Animals As Leaders can be very abstract. Do you consider free jazz an influence on your music? Did you listen to a lot of jazz growing up?

RD: After the Generation Axe tour, what do have planned next? Are Animals As Leaders going back into the studio?

TA: Finishing this current Animals As Leaders album we’ve been working on and then touring off of that. We have some international dates already booked so we’re gonna be pretty busy.