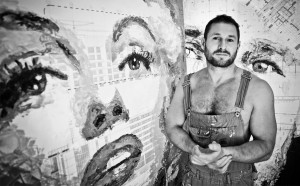 ArtBeat, one of the major fundraising events for AIDS Care Ocean State, features the contributions of several local artists and businesses.

On Friday, October 24, the live and silent auction will be held at 5pm in the Grand Ballroom of the Biltmore Hotel in downtown Providence. Items up for bid include art and antiques, vacations and travel packages, jewelry, home goods and gift certificates for various restaurants.

This year’s featured artists are Rhode Island-based designer Kent Stetson and the internationally renowned Havi Schanz. “Marilyn Providence,” by Schanz, is valued at $6,500. “Providence I-Way Bridge” trio of designs, by Stetson, is valued at $1,000.

Stetson is best known for his sleek and ultra-modern handbags, which are high in demand. After studying at Brown University, Stetson took an interest in new media and hybrid digital/traditional fine art. In 2003, as a framing experiment, he presented one of his digital paintings as a handbag, and has since made bags for collectors throughout the world. As of summer 2013, his work has been sold in 75 stores and was featured in many of the nation’s top juried fine craft shows. Stetson also has been featured in RI Monthly, Providence Journal, Providence Phoenix and Providence Monthly.

Argentina native Schanz now lives in Miami Beach, and has almost 30 years of combined experience as an artist, architect and interior and graphic designer. His art has been widely exhibited in several solo and group exhibitions in Argentina, Venezuela, Colombia, United Kingdom, Italy, France, Spain, Check Republic, Germany, Greece, Australia, Mexico and the United States. His background in architecture is evident in his celebrity portraits, which feature Impressionistic, Romantic, and Baroque influences. Schanz has donated his art to benefit such noteworthy charitable organizations as Children’s Autism Foundation, Human Rights Campaign, Lions Club, Make a Wish Foundation, and Unicorn Children’s Foundation.

Tickets to the live and silent auction are available for purchase at aidscareos.org.