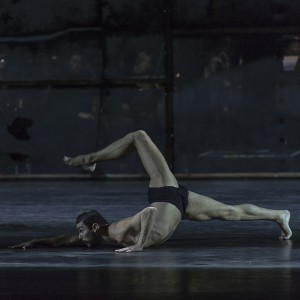 BalletBoyz, the all-male dance troupe from London, dazzled a sold-out crowd at the Veterans Memorial Auditorium in Providence on Sunday, January 31. The performance was part of the FirstWorks Artistic Icons series.

The group, which won the National Dance Award for Best Independent Company in 2013, was founded in 2001 by Michael Nunn and Billy Trevitt, two former principals with the Royal Ballet. During their 12 years at The Royal Ballet between them they danced all the principal roles.

The show featured two routines. “The Murmuring,” choreographed by Alexander Whitley, was set to electronic duo Raime’s propulsive score. “Mesmerics” was choreographed by the highly acclaimed Christopher Wheeldon (artistic associate at The Royal Ballet) to music by legendary American composer Philip Glass. Videos of the dancers discussing their work were shown before the routines.

BalletBoyz also will perform in nine other cities, including Santa Fe, Houston, Dallas and New York. For more information about Balletboyz, go to their web site at balletboyz.com.

The FirstWorks Artistic Icon Series continues with “Walking with ‘Trane,” a new live music/dance event created by the Brooklyn-based Urban Bush Women dance troupe in tribute to the life of legendary jazz saxophonist John Coltrane and his seminal jazz suite, “A Love Supreme.”

Urban Bush Women created the work to celebrate two important anniversaries — 50 years since the revelatory A Love Supreme album and 30 years since the founding of Urban Bush Women. “Walking with ‘Trane” has its Rhode Island premiere on Saturday, February 27 at 8pm at The Vets in downtown Providence. Doors will open at 7pm for JumpStart festivities in the venue lobbies. Tickets are on sale now at 401-421-ARTS (2787) and at first-works.org.