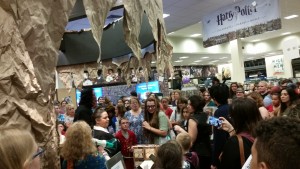 I’m a nerd. A nerd with an obsessive book buying problem. It’s an occupational hazard — I’m an English teacher and write on the side. Words are my life! People have tried convincing me that I should make the switch to e-readers, and I can’t. My husband argues that I could read without a nightlight, bring multiple books with me on the go, and have what he claims is “50 less bookshelves in the house.” However, there is something about holding that book in my hand and rifling through the pages — not to mention the smell of a book. (Yes I’m weird but it’s a real thing. It’s called biblichor, which literally translates into book: the fluid that flows in the veins of Gods.) So this bibliophile can’t give up the physical thing. But maybe it’s my age; maybe I’m the only one. After all I hear that libraries are going the way of the dinosaur … maybe I’m a dino in a digital world? With all of my friends turning to e-readers, are bookstores a thing of the past? Well, I would like to report that they’re not! 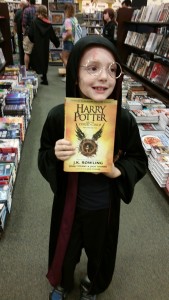 I, along with 850 of my new closest friends, attended one of the many midnight release parties for Harry Potter and the Cursed Child by Jack Thorne based on an original story by J.K. Rowling, John Tiffany and Jack Thorne. The last time I did something like this was July 21, 2007, when the last novel of Rowling’s beloved series came out. Now I’m the mom of a Harry Potter fan, so I knew I had to take my son, which meant choosing the closest bookstore to my house, Barnes and Noble in Warwick. I was fairly confident that after an hour, he would want to go home, and I would grab my book the next day. Either I underestimated the extreme night owl I am raising, or I underestimated the power of Harry Potter.

I was overwhelmed at the amount of people who came out for this event. We walked into Rowling’s world as we entered the store, and were directed to the gift section where we could get our ticket for the book. People were dressed in costume, including my own little Harry Potter. I was given a ticket and explained to my son that there was no way we’d make it to midnight.

Before walking through the Nook section (which as a book snob I tend to avoid like the Forbidden Forest) we were sorted into houses. We made our way to the Quidditch pitch, which was manned by URI’s Quidditch team, The Rhody Ridgebacks. Kids were playing, adults were playing, and these students from URI were perfect ambassadors for their school. It was a blast! (And yes, I did play. I was a keeper, goalie for the Muggles, and kids were kicking my butt!) East Providence’s Vladimir Snape was on hand for photos and readings, and when you finally had your book, autographs.  When a young excited boy exclaimed, “I need a wand we’re killing you!” he stayed in character asking, “Why, have you not read the whole series?” There was a wandmaker, who took the time to examine my son’s homemade wand and told him what it stood for, face painting, Daily Prophets and a Muggle Wall where people could write what Harry Potter means to them. There were cute drawings, hearts that said “I love Draco Malfoy” and moments that made you stop, like how the series helped a parent read with their child, or how the series helped someone during times they needed someone or photos of families on vacation at Harry Potter World. The magic of books.

I had a moment to speak with the Ridgeback’s Megan Conway and asked her if bookstores were important. “It’s the experience of sharing what you love. Right here,” she said gesturing to the Quidditch pitch. “This came from a book.”

While standing in line, a friend texted me. Her daughter was four scenes in, and it wasn’t midnight yet. Apple had an early release at 11pm. The girl in front of me was in full cosplay, including heels. She looked lovely, but must have been tired!  I explained about Apple, and if it would have changed her mind. “I would have still come here,” Alondra Cruz explained. “It’s a celebration.” And it truly was. As the minutes ticked on, the booksellers made announcements to cheering, which only grew as we counted down.

And that’s what it’s about: A celebration. We can’t do that over a digital copy. We need bookstores to gather, celebrate and meet new people — a place where in these digital times we can still come together over a common love. Sure, some of us love Tolkien, some of us love King, some of us love young adult or romance or graphic novels. But in that space we are all united over one love: the love of the written word, of stories. And honestly,  I can’t remember ever going to a bookstore and not meeting a nice person.

So is it worth it to spend a Saturday night at a bookstore into the wee hours of a morning? Of course it is. I hope another series comes around that has this spark in it for so many people.

Harry Potter and the Cursed Child is available at Barnes and Noble, Symposium Books, Books on the Square, Barrington Books and online. But do yourself a favor and stop at a bookstore! You’ll have way more fun!

All My Sons — Classic Theater with a Standout Cast

Yes! And…: The Providence Improv Fest takes the stage at AS220