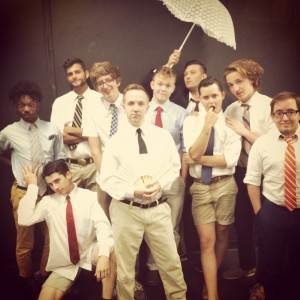 I was more than intrigued when I saw that EPIC Theatre was staging an adaptation of Moliere’s Tartuffe. As nerdy as this sounds, I love Moliere. There is something to be said about theater that has lasted over 350 years and can still make audiences laugh. Tartuffe is about the blind adoration Orgon (Stevie Smith) has for a seemingly pious man, Tartuffe (Jerry Middlemiss). Orgon has invited Tartuffe to live in his home, however his family, in particular his housemaid Dorine (Stephen Peterson), sees this con man for who he is. This play stays true to the farce genre, so if you aren’t familiar with this classic piece you can expect madcap hilarity between the characters.

But what can really be done to this classic piece to make it epic? It turns out plenty. In this adaptation, directed and adapted by EPIC’s artistic director Kevin Broccoli, The Boys of St. Matthew have been banned from putting on Tartuffe. Originally the school was fine with letting the boys perform the show because “anything written 100 years ago couldn’t be that bad.” We learn this from Father Frank, portrayed by Geoff White in a role that one can only hope he and Broccoli will continue to develop for future projects. The show is performed without an intermission, as it is only runs 75 minutes. There are virtually no props, there are no sets (since St. Matthew’s took them away) and there are no women. (After all it is the boys of St. Matthews.) One would think that not having these elements would affect the play in a negative way, but on the contrary, their exclusion adds to the wit of the evening. As the show is the boys putting on a show, the fourth wall is broken occasionally, and modern references are slipped in.

When a show is performed this well, it is impossible to mention everyone. This was a phenomenal cast. In fact, this cast was so extraordinary I can’t help but wish they would all be cast in another production together. They were a cohesive comedic troupe that left you wanting more. Each and every player brought energy and laughs. Hands down, Stephen Peterson’s portrayal of Dorine was absolutely brilliant. Whether he was breaking the fourth wall or staying true to the original, he was an absolute joy to watch on stage. As for Tartuffe himself, Jerry Middlemiss played this role differently than I had ever seen it. He had this quiet comedic quality to his role, but at the base of it all he played this role like a psycho. It was a much more in-depth layer than this character usually gets. Michael Shallcross was hilarious as Elmire, especially the scene when Elmire tries to entrap Tartuffe. Nick Thibeault sets the evening perfectly as Madame Pernelle. In fact, his first scene was a true delight as Broccoli worked in some interesting moments of movement. The dynamics of the movement with Thibeault at the center set the stage for this entertaining evening. And of course a nod to Stevie Smith, who did a wonderful job as Orgon the fool.

Broccoli has not only adapted this script in a new and clever way, he has assembled a troupe of performers who simply work well together. If there is anything negative to say about the night, it would be that you‘re disappointed when it’s over. You don’t want the night to end, because you’re having such a great time! I laughed so loud at some parts, I was afraid I was bothering my fellow theater patrons.

Don’t see this show if you are looking for an overplayed run-of-the-mill period piece. But if you want to see something clever and witty, make your reservations now.

All My Sons — Classic Theater with a Standout Cast

Yes! And…: The Providence Improv Fest takes the stage at AS220