When my highly creative editor posed this question to me, I jumped at the chance to report on the subject. I thought it would be an easy assignment; a “journalistic slam-dunk” if you will. Yet, as I attempted to compose this article, I realized the answer might not be so cut and dried.

The subject of emotions and music is certainly not new. In fact, there is a theoretical treatise from the 1600s called “The Doctrine of the Affections” that discusses this topic. It outlines six elements of affect: admiration, love, hatred, desire, joy and sorrow, and is an early attempt to codify and categorize musical language.

In terms of how a musical composition achieves emotional response, it seems there are a few pieces to the puzzle. The primary elements of tonal music (melody, harmony, rhythm, tempo and in some cases, text or lyrics) can have an individual or collective effect on the overall emotional content. Techniques such as orchestration, arrangement and interpretation can be equally effective.

In my research, one philosophical question remains unanswered: Can music, in and of itself and without external context, evoke fear? Or conversely, is any emotional response to music dependent upon what our minds associate the music with? 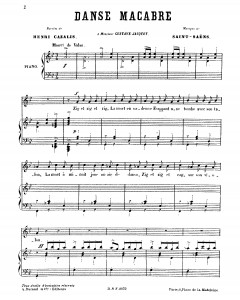 Film and TV soundtracks are especially interesting when taken out of their visual context. Anyone who has ever watched Rod Serling’s “Twilight Zone” knows the opening theme by composer Marius Constant. In fact, it is so well known that people will hum the melody in casual conversation when referring to something weird. This alone makes a case for memory association being primarily responsible for a listener’s emotional response. The composition itself explores angular melody, dissonant harmony, disconnected rhythms and uncommon instrumentation: electric guitar as the lead melodic instrument, Latin and traditional percussion, clustered low brass and high woodwinds. There is certainly the element of surprise throughout this short piece, making an equal case for the strength of the composition.

The Exorcist, a 1973 movie that has been called the scariest film of all time, takes its theme music from British composer Mike Oldfield’s “Tubular Bells.” To my ears it doesn’t sound necessarily scary, but certainly intense. In this case, the controlled use of repetitive minimalism and sparse orchestration seem to do the trick. A similar use of minimalism can be heard in the soundtrack to the movie Halloween, written by John Carpenter himself. Carpenter’s theme sounds a little scarier to my ears than Oldfield’s, but I don’t know why. Both movies freaked me out completely, and the soundtracks leave the listener no choice but to experience the horror all over again. Chalk one more up to memory association.

Perhaps the ultimate master of scary music in the context of film is composer Bernard Hermann. He is best known for the soundtrack to the movie Psycho, which kicked off the genre now known as “slasher films.” Alfred Hitchcock himself credited the soundtrack as being of equal importance to the plot. The opening theme, written entirely for strings, is written with short, choppy, dissonant chords, and the melody is particularly unmelodic. The accompanying music for the infamous shower scene is highly unpleasant and uncomfortable to hear. In these examples, it is certainly evident that the music itself plays a significant role in the scariness factor. However, a YouTube review of the shower scene seemingly strengthens the memory association tenfold.

For your consideration, I present a short list of examples from classical music.

… one example from the hard-bop period of American Jazz …

Each example makes a case for compositional strength, though most have an implied underlying narrative. In the case of Black Sabbath, Ozzy Osborne’s voice alone was enough for me to double-check the deadbolt on my front door.

From a musical perspective, this author finds nothing scary about Michael Jackson’s “Thriller.”

What music scares you? As this is a very personal subject and opinions may vary widely, I invite our readers to share their own opinions and scary music finds with me at jdemarco@motifri.com. All music mentioned in this article is available as a public Spotify playlist: open.spotify.com/user/jrdemarco/playlist/1A6AmzxTroFIysbSLCcf8n

This Season’s a Classic!: Get a little culture in your life, will ya’?

Fly Like a Bumblebee: Classical concerts bloom all spring

This Season’s a Classic