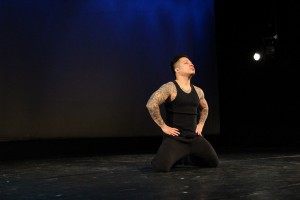 In 1951, the late Langston Hughes questioned societal ideologies with a simple question, “What happens to a dream deferred?” Many have dared to tackle this question and failed, but one man has defied the odds of living the American Dream: Sokeo Ros.

Born in a Cambodian refugee camp in Thailand and the first of his siblings to travel to the United States to seek refuge, Ros was quickly swept up in the aftermath of the Khmer Rouge genocide and found himself fighting the odds against gang violence, poverty and the urban ghettos of Providence. At the age of 15, Ros found solace through hip-hop dance. He performed with the Carriage House Performers and enrolled in the Everett Company Stage School. This method of coping became the cornerstone for his future as Ros would go on to form his own dance company, Case Closed! in 2004.

“I fell in love with the stage and just kept moving forward from there,” said Ros. “There were bumps and obstacles along the way, but this was the only thing that kept me afloat, in a sense. The music was big part of it because hip-hop was a struggle to change lives. I was living through a struggle at the time but beyond the music, it was more of the culture and the movement.”

Today, Ros has achieved local stardom with accolades that range from the Mentors That Matter award in 2007 to his involvement in over 10 productions including Brainstorm, which has run since 2011 and From Refugee Camp to Project, his most recent and insightful production yet. “The most important award for me has nothing to do with money or certificates, but acknowledgment, and the biggest one was receiving acknowledgement and appreciation from my parents. I was a disappointment for so long. I have finally done something that they are proud of. They know of my work and appreciate it now more than ever,” said Ros. “They always used to ask me, ‘When are you going to get a real job?’ But now they brag to their friends about my work and accomplishments.”

From Refugee Camp to Project, which was established in 2013, chronicles Ros’ initial struggle of living in America during the 1980s and his eventual return on a mission trip back to Cambodia to see his parents, whom he had not seen in almost three decades. “There are a lot of things about me in this piece that my family and friends do not know. It puts me at a very vulnerable state, which I did not like at first. I didn’t like being vulnerable like that on stage in front of an audience. But I am learning to embrace that. So the learning and growing is happening throughout this whole process, even on stage,” said Ros. “This is a very different for me because it is challenging my artistic side. It is me on stage just baring myself to the world. Sometimes I feel naked and insecure. There are a lot of emotions going on all at once. But it is definitely needed.”

In establishing the premise of the production, Ros attempted the impossible, arranging the pieces of his life that have been muddled over 30 years between his voyage across seas and rough upbringing. “I actually didn’t know a lot of my own history and my family’s history until 2004, when I signed on for a tour called Home Movies. I didn’t know 75% of my history until I interviewed my parents with the help of Aaron Jungles,” said Ros. In a way, this play became a healing process for him as he still continues to understand his former self through further communication with his parents, who were the only members of his family still alive in Cambodia after the Khmer Rouge.

With its premiere at the Ko Festival in Amherst, Massachusetts, this past summer, Ros has been praised critically for his fusion of traditional Khmer dance and the emotionality behind his deeply personal narrative that encompasses every aspect of the production. While not easy for Ros, the production comes from a place of resilience and pride; he gives his all to each and every performance. “This show is helping me heal. But I guess in order to really heal, you kind of have to go through the pain. And I was going through it. All of it: the anger, the sadness, the grieving and the happiness. It was a part of my growth as an artist and as a human being,” he said.

As for the future, Ros hopes to bring the production further into the US and attempt to reach different communities and ethnicities that might share in the heartbreak that Ros faced as a youth. “My plan for this project is to keep it going as much as I can, and take it on tour to different cities, states and hopefully, countries,” said Ros. “I feel that it is a very relevant story for what is going on today. Especially since I was a refugee coming into the US in 1983. There is a lot we can learn from each other’s personal stories.”

Catch Sokeo Ros in his production of From Refugee Camp to Project at Everett Stage in Providence from January 15 – 17 and 22 – 24. Learn about his future projects at everettri.org.