Don’t be fooled into thinking this hit Broadway musical show is at all creak with no crackle and pop! Despite its lineage going all the way back to the 1954 Bing Crosby & Danny Kaye-led film, this touring production is bursting at the seams with youthful energy and show stopper numbers that took my breath away.

Full disclosure? I’ll stand up and admit it — I am card carrying, MGM musical loving, tap dancing enthusiast from birth. My fondest childhood memory is seeing Judy Garland, Gene Kelly and Fred Astaire shine on the big screen in That’s Entertainment at 7. White Christmas is one of my top holiday movies (next to Easter Parade, and Scrooged, of course) and that meant this production had awfully big shoes to fill, right out of the gate.

The basic plot is straight from the classic movie, after a brief prologue where we meet military grunts Bob Wallace and Phil Davis, entertaining the troops for the holidays under the benevolent but brusque General Waverley. The action flashes forward 10 years to the future. Now “Wallace & Davis,” the duo is headlining on the Ed Sullivan show with the most energetic chorus of dancers I have ever seen. The duo soon meet cute with the sister-act of Betty and Judy Haynes (their brother being “Dog-Faced” Haynes, an old army buddy). Of course, things move quickly and there’s a love match, a harebrained scheme and all four end up in a cozy inn in wintery Vermont. Wait — it’s owned by our old General Waverley?? And we’re in the middle of a freak heat wave for Christmas?? Ok, now we’re rolling. 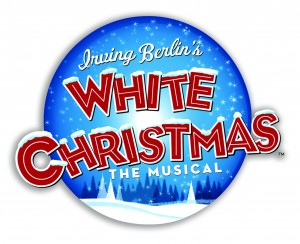 This show has an overture. WHAT? They are playing an honest-to-goodness overture before the curtain even rises? I am in heaven. Do you even remember overtures?? They don’t really write them anymore, but for those that remember, it is a lovely 8-10 minute teaser of numbers from the show that feeds your anticipation. Overtures are glorious.

The costumes are flipping gorgeous. Holy technicolor perfection. Right out of the gate in their TV debut, our two leads are bedecked in the craziest bright green matching suits (right down to the electric green socks & suede shoes.) The chorus in this number — and the rest of the numbers that follow — look ’50s picture perfect. The colors are vibrant, but avoiding boring cliches with layers upon layers of detailing in the underskirts, sequins, beading and more. Nothing is left undone by award-winning Broadway costume designer Carrie Robbins, who wisely alludes to many of designer Edith Head’s work in the original movie, keeping those sexy silhouettes of the time and yet also finding plenty of room to embellish things with her own wonderful sense of style. 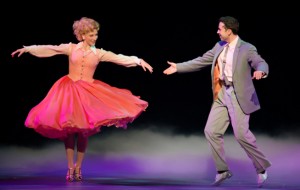 An arsenal of Irving Berlin tunes. I’d lay money that most folks are familiar with more of his winning songs than they are aware of — there’s “Happy Holiday,” the title song “White Christmas,” “Blue Skies,” “I Love A Piano” and “Snow” to name only a few. Even the hardest hearted Scrooge can be won over by the charming music and lyrics by Berlin. (Pick up a copy of the ’04 Original Broadway cast recording for anyone on your list — it’s a guaranteed crowd pleaser!)

The performances are effortless, charming and will put a smile on your face, guaranteed. The tour coming through Providence is top-notch, featuring stellar dancers and some gorgeous voices. The male leads are wonderful, standouts are handsomely dimpled Sean Montgomery putting his Gene Kelly-like spin on Wallace and Jeremy Benton is funny and fleet footed as comic sidekick Davis. As Betty (also known as the “Rosemary Clooney role”) locals might remember Kerry Conte from her recent appearance as Eliza in My Fair Lady down at Theatre by The Sea, where we were first introduced to her sheer velvet singing voice. Kelly Sheehan’s quirky take on sister Judy is a treat and her dancing is simply perfection.

These guys all all tap-dancing MACHINES. Performing with dazzling smiles and engaging stage presence, this cast was impressive. But what truly took my break away was the technical precision that they brought to each and every production number. The highlight of the night is the sweeping and flawlessly performed “I Love A Piano” number that kicks off the second act. I don’t think I have seen such a tight tap number offered up with such ease outside of the Radio City.

How many people can you fit into a train car to sing a big number? In the original movie, the song “Snow” was sung as a cutesy, setup on the way to Vermont. Here the director and choreographer have blown the number wide open, with over 20 cast members in the mix, and somehow managing to keep everything “contained” to the train car at the same time. The end result is a very funny, highly entertaining number that highlights many of the supporting cast. 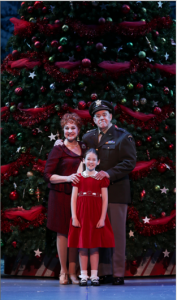 It’s “Painless” the Dentist from M*A*S*H!  Again, kudos to the casting directors for not only working some magic to assemble such a amazingly talented cast, but the cherry on the top is when Conrad John Schuck enters as the General. If you don’t know the name, trust me, you’ve seen this character actor’s work in M*A*S*H, McMillan & Wife, Law & Order, Star Trek IV and VI – plus my personal favorite from 1976 Holmes & Yo Yo where he played a robot detective. (Don’t laugh, I watched and loved every episode.) Oh and he starred in a little Broadway musical called Annie opposite little known Sarah Jessica Parker. Yup. Daddy Warbucks himself is General Waverley. PERFECTION. 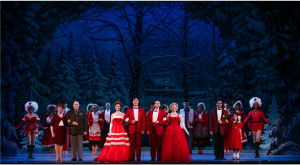 Not all Christmas shows have to dive deep into doom and gloom to lift your spirits for a “feel good ending.” When the curtain fell after the show’s well-received — and snow-filled — final number, I looked at my companion and asked, “WHY haven’t we done this every year?” (Answer: because the show has never toured here before, aduh.) But truly, this show is, in a word, delightful. While yes, the fashions, mores, and humor are from an earlier era, the show does a truly masterful job of celebrating the style and grace of that era without commentary. It simply celebrates the Christmas season with love, music, dance and humor and leaves you with a full heart — just in time for the holidays!