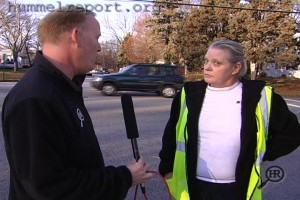 Every school day, just after 8 o’clock, Gail Johnson leaves for her job as a crossing guard for the city of Warwick in her 2005 silver Cadillac with Rhode Island license plate XX-999.

Johnson’s son,  Joshua Brayman, is out the door most days well before his mom. He drives to work in Providence. His vehicle? A 2005 silver Jaguar with Rhode Island license plate  XX-999.

A Hummel Report investigation found that Johnson and her son have used the same set of license plates for two cars for at least 14 months. One plate is on the back of each car parked in the driveway of Johnson’s house,  which borders Green Airport and does not have any other houses nearby.

The Cadillac is registered and the Jaguar is not, even though Brayman bought it in October of 2012. That means he’s avoided the city’s tax rolls, and the state did not collect sales tax because he never went to the registry.

When we asked Johnson why she was driving with just one plate, she said the front plate of her Cadillac was damaged in an accident.

Hummel:  We also found that the same plate, XX-999, is on a Jaguar that’s parked in your driveway.

Johnson: Yeah, because his was stolen.

Johnson said her son had one of the license plates stolen from his car, adding that the police told him he could use a different plate if he wanted, a statement that did not sit well with Warwick Police Chief Stephen McCartney. We gave the chief  a copy of our interview with Johnson and videotape of the two vehicles on the road simultaneously with XX-999. “You know, you’ve got to question judgment. It’s all about judgment here,” the chief told The Hummel Report.

The colonel says police records show Johnson’s Cadillac was involved in a minor accident nearly three years ago, but there was no mention of a crushed license plate.

Johnson started as a part-time crossing guard in 1994 and became full-time in 2008, working 30 minutes each morning and afternoon. She makes $40 a day. Johnson is a civilian employee of the police department.  She is also the widow of veteran Warwick Police Officer Robert Johnson, who retired in 2008 and died in May of 2011. Mrs. Johnson receives a widow’s pension that also includes free medical coverage from the city.

Her 2005 Cadillac in still registered in her husband’s name three years after his death and she admitted to us she periodically drives her son’s unregistered Jaguar.

Hummel: Is that car registered?

Johnson: I’m not sure. I don’t think so because he’s selling it.

Hummel: So what happens if he gets in an accident?

Johnson: I hope not. It’s just that he put it on because he needed to. His plate was stolen and everything.

Hummel: You have both cars parked in the driveway — one registration, two plates.

Johnson: Right. Well, we were told to do that by the police department.

Hummel: Who told you in the police department?

Johnson: I’m not sure of his name. It was a second shift cop.

Hummel: But you don’t see a problem with that driving around?

Johnson: I gotta watch my crossing.

Two days after our interview with Johnson, Warwick police also spoke with her.

“We told her we do not want to see her back at that crossing guard spot if she’s operating the Cadillac unless there are two plates on it,” Col. McCartney said.

So what about Johnson’s claim to us that a police officer told her she could use both plates at the same time? “In her interview with us she said, “I never said that,” meaning I never told them about a Warwick Police officer.”

Brayman, who works at a company on Allens Avenue in Providence, told police he bought the Jaguar in October of 2012. Col. McCartney says Brayman finally had it registered it last month — the day after our interview with his mother. Because the police didn’t observe the unregistered car on the road as we did, the chief said they could not cite him despite our video evidence.

As a result of our investigation, the city now plans to send out a bill for back taxes on the Jaguar, although officials said they won’t know the exact amount for another month until the tax department gets paperwork and the car’s VIN number from the registry. Johnson also faces citations from the city and the registry for a host of violations, both civil and criminal.

A spokeswoman for the registry said state law prohibits her from commenting on a specific case, but she did add that a person who fails to register in 20 days would face interest and penalties.

And what about punishment from the city?

“It is certainly embarrassing to the city that you’re a crossing guard and came to work potentially with an unregistered vehicle, or a vehicle with one plate on it,” the chief said. “Because of the personnel rules I have to take, it’s going to be the personnel division that’s going to take the action on it.”

A spokeswoman for Mayor Scott Avedisian told us, “The employee was disciplined. Because it is a personnel issue, the city cannot comment on the specifics.”

But apparently it was not enough to cost Johnson her job. We saw the crossing guard back at her post last month, the second plate returned to the front of her Cadillac.

The Hummel Report is a 501 3C non-profit organization that relies, in part, on your donations. If you have a story idea or want make a donation  go to www.hummelreport.org. Or mail Jim directly at jim@hummelreport.org.