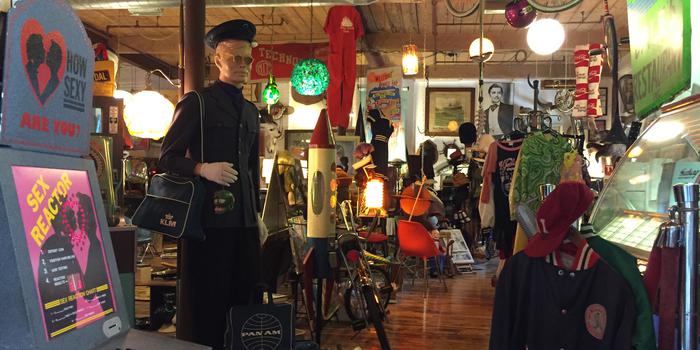 is an immense antique shop in a nondescript warehouse near Smith Hill, beautifully curated like a captivating museum of days gone by. Every square foot is full of more treasures than can be absorbed in a glance, from vintage furniture to movie posters to figurines and everything in between.

The man behind POP is Darren Hill, who makes his primary living as a successful band manager, and was formerly a professional musician for over a decade. I met with Darren while he was busy preparing for the Mighty Mighty Bosstones’ (a client of his) annual “Hometown Throwdown,” a run of three shows at The House of Blues.

When it comes to collecting, Hill caught the bug early. “My mom says I was always dragging stuff home as a kid.” He grew up in New Orleans, and got his start as a bassist in the band Red Rockers, who saw some mainstream success in the ’80s. While on tour all over the world, he would frequent antique shops as a way of staying out of trouble.

He migrated to New England when Red Rockers relocated to Boston, and later joined up with hometown hero Marc Cutler to form the Raindogs (for which Hill was recently inducted into the RI Music Hall of Fame). He also appeared on “SNL” when he was briefly enlisted to play for Paul Westerberg’s solo band.

Eventually, Hill found that he wanted to slow down. “After being a musician for 16 years, I started a family and wanted to get off the road,” said Hill. “Management seemed like a natural fit, because I always seemed to end up a kind of de-facto manager of the bands I was in.”

Since the mid ’90s, before working from home was a “thing,” Hill has run his business, called Ten Pin Management, out of his home in RI. “It was challenging initially, but it quickly became more and more doable as technology developed.”

His management roster began with local bands The Royal Crowns and Dropkick Murphys, both of whom he knew personally. Currently, Ten Pin manages three artists: The Bosstones, Replacements front man Paul Westerberg, and psych rock legend Roky Erickson. He handled the Replacements reunion, a seismic indie music event that he “hoped would happen, but seemed more doubtful with every year that passed.”

Despite the busy schedule, Hill always continued collecting. In 2012 he opened the original, much smaller POP emporium, in East Greenwich. Hill bought his current building in Providence three years ago, and opened the shop last June. Lack of inventory is never an issue; below the showroom, there’s a 5,000 square foot basement chock full of antiques.

“I like things that tell a story,” said Hill. “That’s the number one criterion. I’d say most of the stuff is midcentury range, ’50s through ’70s, probably because those are the years I grew up in.”

Hill also built in a gallery/performance space, and had his first big event last year. “We had photos chronicling the punk scene from Bobby Grossman, who went to RISD, and contributions by Shepard Fairey. I used to manage the NY Dolls during their ‘04 reunion, and was able to get David Johansen to play. It’s cool to be able to connect it all like that.”

Darren Hill is one of the lucky whose career is a natural extension of his passions. With his huge collection and some aggressive marketing, Hill could conceivably corner the market. But you never get the sense that the balance sheet is the motivation. He seems content with sharing his lifelong hobby with the community.

That principle of personal connection carries over to his management company. “For the artists I work with, my loving their music and respecting them as artists is a must,” says Hill. “That philosophy is, admittedly, not always the greatest thing financially speaking.” Hill says he is sometimes open to new clients, but for now is very satisfied with his current roster.

Pop Emporium has some events coming up, including Lux Lives on February 3, a thematic show loosely based on the Kramps. It will feature Kogar the Swinging Ape, The Itchies and other acts. They will also be hosting The Supersonic Record Explosion, record show with vendors, bands and food trucks on April 1.

For Hill, his love of collecting and music go hand in hand. “What’s cool is this place has actually become kind of a hangout for bands and musicians. A few times, I’ve looked around here and realized that almost everybody in the shop is in a band. I love seeing that.”