On Posted on November 12, 2013December 2, 2013 by Nicholas Iandolo to Featured, Lifestyle
Featured 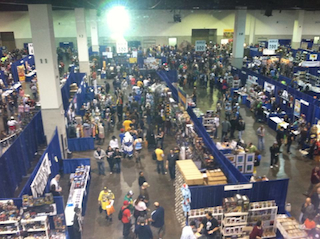 “The biggest show in the smallest state …” just got a whole heck of a lot bigger — 10,000 more attendees bigger than last year, topping out at 25,000! I’m talking about Rhode Island Comic Con (RICC). This is the sophomore year for this pop-culture event and whereas many similar conventions are all trying emulate “the big one” (i.e., San Diego Comic-Con), this one is doing it its own way!

On Day One, I could tell you that this year’s offerings blew away the amazing inaugural first year of this convention. In fact, it’s about three times bigger — more artists, more vendors, more exhibits, more activities, more events, and just about more of everything.

So where to begin? 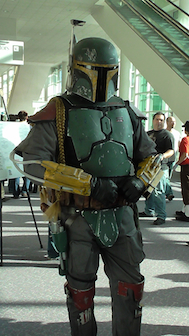 Once I entered the main exhibit hall, I was immediately taken aback by how big this con has grown in one year and how the level of cosplay skyrocketed. There was everything from your standard comic book and anime characters (Batman, Batgirl, Superman and Wonder Woman), video game characters (Halo and Assassins Creed), fantasy characters (elves, wizards and warriors), Power Rangers, sci-fi characters and zombies to the littlest attendees (i.e., babies) dressed up like Star Wars characters! I even saw a dog in costume! 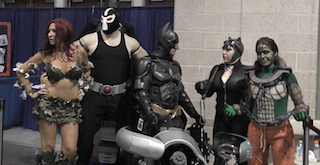 One side of the exhibit hall was full of many talented artists, all promoting their original artwork, comics and books. Also, this year there was a lot of handcraft artists, such as Kristy Gibson of Koi Fish Asylum vending her handmade superhero masks. “It’s my first time here … having fun, and it’s been a great experience!” She tells me, all dressed up as The Joker’s accomplice/girlfriend Harley Quinn. 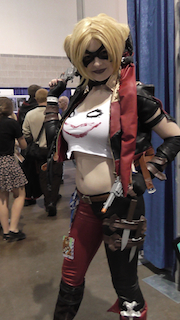 After crossing the expanse of the exhibit hall, I was in the presence of a life-sized model of none other than The Rancor Beast from Return Of The Jedi! And across from The Rancor is a full-sized Jabba The Hutt patiently waiting for its next Slave Leia to come along! 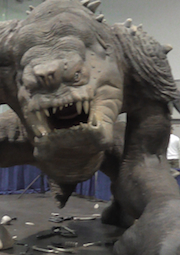 Then I came across another interesting vendor, Rikki Vitello of Saints & Sailors, who makes custom jewelry via a 3D printer! I was duly impressed, and asked her how she does it. Her response as she points to the magical machine, “I make this with that!”

With tons of stuff going on in the exhibit hall, I made sure not to forget hitting some of those wonderful panel discussions that are a staple of all comic cons.

The one I was psyched about this year was the Flash Gordon movie panel featuring Sam J. Jones (Flash Gordon) and Melody Anderson (Dale Arden). Unfortunately, due to the recent shooting at LAX, Ms. Anderson wasn’t able to make it to the convention. But Sam Jones did. His stories about filming Flash Gordon were great, as were his stories about his encounters with Arnold Schwarzenegger, and his adventures as a real-life private body guard for Mexican billionaires!

One panel attendee, Sam Desmarais, was even more psyched to be there more than me. “It was something I’ve been waiting to do for a long time. I still have the same VHS tape of Flash Gordon!” she tells me.

Later, I went to his table in the exhibit hall and talked to Mr. Jones. The guys in line ahead of me asked him what one DVD he’d have with him if he were on a deserted island. The former Marine’s answer was ever so pragmatic, “Where’s the power gonna come from?” So when I got to him, I asked, “Forget about the DVD, who would you rather have with you: Melody Anderson or Ornella Muti [Princess Aura from Flash Gordon]?” His answer, “I’d be more concerned about the food source than having another person not contributing!”

Some other cool panels that I didn’t get to were: Droid Building with R2D2; Billy Dee Williams (Lando Calrissian from The Empire Strikes Back and Return Of The Jedi); Batman Panel with Adam West, Burt Ward, and Julie Newmar, Sci Fi Speed Dating; Weekend At Bernie’s with Andrew McCarthy (et al.), and many more!

There were so many other awesome things going on at RICC that have nothing to do with comics, like real-life Quidditch gameplay courtesy of URI (on Day Two). These enterprising young men and women (from all over the world!) have adapted the fantasy game full of broomstick flying and winged Golden Snitches into a game that us ordinary muggles can actually play! In fact, there’s a whole international league dedicated to this unique and growing sport called International Quidditch Association (IQA). “It’s kind of like rugby with a broom between your legs. And most importantly, it’s coed,” says Kristina Moy, Conventions Manager for the IQA.

This comic con is one that parents can easily bring their kids to. There’s even a Kid’s Con component to it, featuring arts and crafts for kids to do, storytime, and a kid’s version of Quidditch! 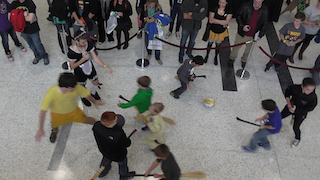 Later in the day, the con got into the costume contest with more than 30 contestants! 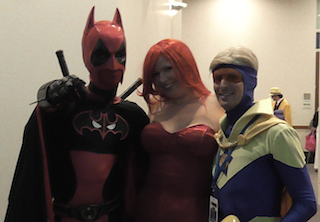 The best overall costume went to Austin Vincent for his 10-foot-tall giant Incredible Hulk costume. At 15 years old, he has demonstrated a level of artistry and talent that even his mother accompanying him was blown away by. She told me of all his dedication in making the costume out of couch foam and paint for months right up until the night before! When I asked Austin how he felt about winning he said, “Feels like a hulking good time!” 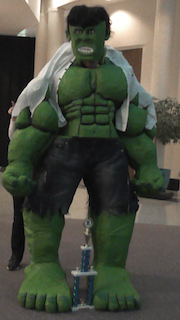 Day Two was pretty much more of the same with a few exceptions. The URI Quidditch players came and did their wild game demo. And it seemed more packed than on the day before.

I was determined to speak with Gil Gerard (known for his title role in Buck Rogers In The 25th Century from the 1980s sci-fi TV show). He was sitting at a table next to Sam Jones, and I found it quite interesting that the two biggest male sci-fi icons of the 1980s were now sitting side-by-side at the con more than 30 years later!

I asked him what he thought of RICC and he said, “It’s good to be here …” And then I mentioned the Boston Red Sox recent World Series victory and he remarked, “Baseball and clam chowder, what more do you need here in New England?”

There was a bit of a show on Day Two called the Apple Kissa Café performed by the ladies of the Maid Café, which is essentially a troupe of young women dressed up in what I can only describe as an anime version of a French maid outfit. I asked one them about it, her alias was Sudoku. “The Maid Café is kind of a wish fulfillment thing. We started doing it at New York Comic Con, and now we’re branching out. It’s fun!”

As I wandered around, taking in the last hours of the con, I heard the voice of the lovely Jami Tennille over the PA system. Jami’s also a Rhode Island actress who was in a film, Dark Minds, that was being shown at the SENE Film Festival at the convention. This demonstrates just how closely interconnected and involved the entire Rhode Island arts, film and media communities really are.

And finally, it’s time to wrap it up. I took another look around meeting local writers, filmmakers, cosplayers, fans and attendees of all kinds. I love events like this. From the real-life exhibits like the 1960s Batmobile or the Batpod (from The Dark Knight) or the Back To The Future Delorean car, gameplayers jamming out rounds of Magic: The Gathering, the Star Wars cantina music coming from the Jabba The Hutt exhibit, the super-hard-to-find DVDs like Johnny Sakko and his Flying Robot, the ren-faire and steampunk style garments inexorably coupled with ultimate in sci-fi battle armor suits, the stars and celebrities from my childhood, to the throngs of people having one of the best times of their lives being part of a pop-culture event that can only get bigger and better and may one day rival “the big one” out west! 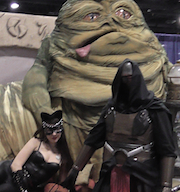 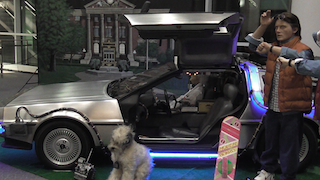