Dare Me: Homeless is a State of Mind 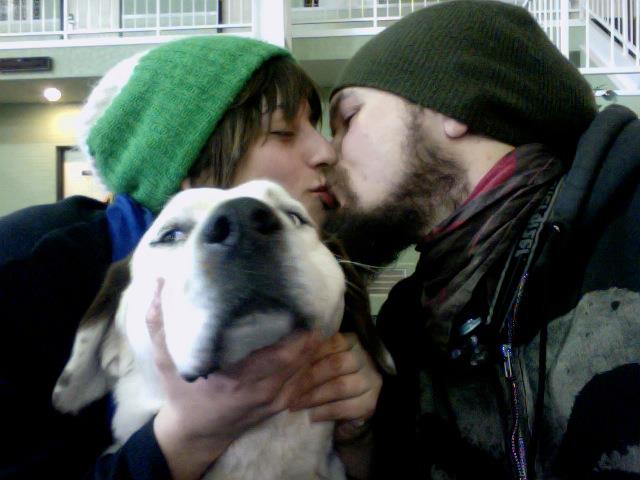 Rhode Islanders, you are all crazy. I am getting a lot of dares that involve reckless harm onto others, endangering my life to the point of almost dying, and doing things involving a bikini and snow. I am really happy that people are sending me dares, but can you please find something that wouldn’t make my parents ashamed of my epitaph?

I did the catwalk, baring all I had to the audience, played with my pigtails and shook my booty. I knew in the back of my mind that this was not the dare I was meant to do this month (anyone could do what I had done) but I did it anyway. Later that night I checked my Facebook page to see if I had any other dares that seemed more inspiring. To my horror, I saw a comment that went something like this: “You’re so F$#&$! $%&#. Why don’t you do something good in this world? You’re just another #&$#$ girl in a consumerist world.” Blah blah blah. I can understand where this man was coming from but needless to say, I was shocked.

Now I realize that this man was probably not mentally sound, but I was determined to show him that I was a good person with good morals and do a dare that would help someone in need. I had been saving a hand written dare I received from an older gentleman at the Coffee Exchange and reread it. I dare you to donate so much blood you almost die. I dare you to throw away all of your mirrors. I dare you to tell your parents the truth. I dare you to take a homeless couple out on Valentine’s Day. I dare you to find me.

I hopped in my car, pulled out my gift certificate to IHOP, and drove around Providence… not to find this creeper, but to take a homeless couple out for a belated Valentine’s Day dinner. It did not take long until I found a younger looking man on the 95 off ramp holding up a sign. Assuming he was homeless, I rolled down my window. “Hey, sir, I don’t have any cash on me but would you like to come out to dinner with me? You can bring along a friend if you have one too.” Without responding, he turned towards a tree and yelled, “Julieanna! This lady’s gonna take us out to dinner. Hurry it up! Grab the dogs!”

“Oh, crap,” I thought, but at least I had some dog treats in the car. The four of them piled up in my hybrid and Julieanna shrieked, “Oh my gawwwsh! We’re ridin’ in a space craft!” She had long brown hair tucked into her oversized winter coat and wore a dirty pink skirt that went down to her feet. Her boyfriend Jud looked exactly like her, except he had on black jeans with his long johns showing and big brown boots. They were hitchhiking up from Tennessee to go to Montreal, even though both of them said they didn’t have a passport yet.

“We’re just sick of it here,” he said. “Just sick of it. Julieanna’s sick and we hear you can git better health care ‘n Canada.” Even though I knew they were right, I felt like an asteroid had just hit me in the heart. Jud grinned. “So let’s go eat sumthin’ before my stomach gits any louder!”

We drove to IHOP and left the dogs in the car. They both ordered a massive amount of pancakes with all types of toppings and had cup after cup of coffee. They told me about their lives in Tennessee and what it was like being on the road. Jud and Julieanna both struggled with mental illness, drug addiction and apparently a pancake addiction too.  It didn’t take long for me to realize that Julieanna was schizophrenic because her eyes kept darting over to the empty booth with a look of horror across her face like she had seen a ghost.

Jud patted her on the back affectionately, “She’s sick in the head. She sees things that aren’t there. But she’s real smart too, real smart.” I was surprised at how comfortable I felt around them, having lived in the south for four years, but also because they really did love each other. I have to admit I was a bit envious of their relationship. “So, what did you guys do on Valentine’s Day?” I asked. “Well, we was in Virginia hitchin’ our way up,” she said. “Jud got me another dog from some travelin’ kids we met and we cooked sum stew by a fire. It was real nice. And Jud gave me this.” She extended her hand out to show me a ring on her wedding finger, elbowing Jud in the side and looking lovingly into his eyes. “He asked me to marry him. We’ve been together for eight years.” Julieanna smiled.

“So, what did you do on Valentine’s Day?” Jud asked me. “Oh, nothing,” I said. “I got stood up, waited in a coffee shop for a few hours hoping he would call, but he didn’t, so I drove home.” “Do you live alone?”  Jud asked. “No, I live with my parents,” I answered. “I was working in New York, but moved back in a while ago after I got really sick and lost my job. I want to move soon, when I get the money. I don’t know where to go though.” I think he could hear the sadness in my voice even though I was trying to hide it. It wasn’t just the whole being stood up on Valentine’s Day either; I’ve been in a funk for a long time now.

“Cheer up,” Jud said, “and when we get to Montreal you should come out to stay with us.  You’re a nice lady, you know? We would love to have you in our home.” Hey, I was supposed to be the person helping them, not the other way around. “Thanks,” I said sullenly, knowing that I would never go and they would probably never make it across the border anyway. “Believe you can and you’re halfway there!” Jud cried, as he slammed his fist down on the table, making me jump. “Make a date of it!” “Okay,” I said with a nod. “And would ya smile more too?!” I nodded some more. “And for cryin’ out loud,” he continued, “you gotta’ make sure you give thanks to bein’ alive because you never know when you will wake up again!”

“Shhhh, I don’ wanna’ hear it,” he said. “No more serious talk. Now, ya see that drunken man standin’ by the door way? I dare you to go give him the biggest wedgie of his life!” Jud and Julieanna both toppled over with hysterical laughter, causing me to start laughing and snorting, which caused Jud and Julieanna to laugh even harder. We all just laughed until we couldn’t breathe anymore and for the first time in a long time I felt like a huge weight had been lifted off of my shoulders.

Yosefa Leora is a journalist based in Rhode Island. If you want to present her with a dare, she can be contacted at yomotif@gmail.com or at DareMe Yosefa on Facebook. She can also be followed at @goagnome on Instagram.

Disclaimer: The couple in the photograph are not the actual characters in the story. Neither of them are homeless or schizophrenic. They are however from Tennessee and madly in love.