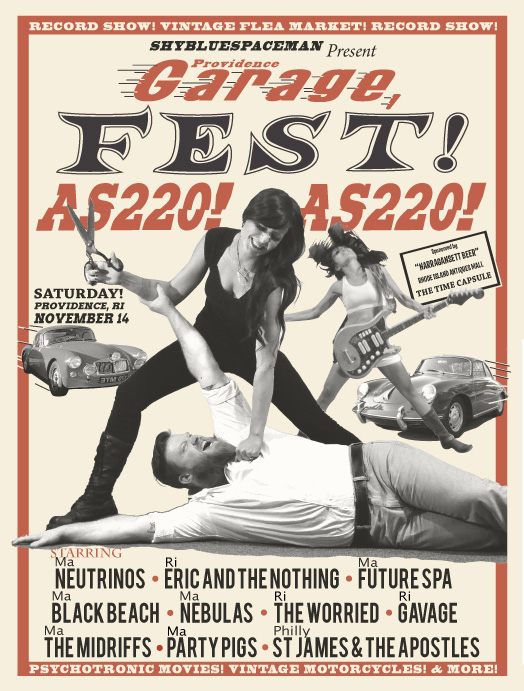 1. Saturday, November 14: Providence Garage Fest featuring Eric And The Nothing, Neutrinos, Future Spa, Black Beach, Nebulas, The Worried, Gavage, The Midriffs, Party Pigs, St. James and the Apostles; 6pm start; $13; All ages; AS220, 15 Empire St., Providence. Ever since I was a kid, Providence has had a great garage punk scene. I was a teenager in the ’90s, loving bands like Thee Hydrogen Terrors, The Itchies (who are still alive and killing it), The Amazing Royal Crowns, Boss Fuel, Ashley Von Hurter and the Haters, and many others. The volume of Providence garage bands has ebbed and flowed since then, but there seems to be a resurgence, not only local but nationally with acts like Thee Oh Sees and Ty Segall selling lots of tickets. Make sure to get there early to check out punk and roll scene vets The Worried (featuring Dennis Kelly from Boss Fuel) and Gavage as well as the new bands. Beyond bands playing, there will be a record show and vintage flea market, vintage motorcycles, lots of men in old black t-shirts, and even “psychotronic” movies. The only thing I liked better than beer soaked fuzz garage when I was younger was trying to get my hands on Russ Myers pretty close to skin flicks from the ’70s at Newspeak.

2. Tuesday, November 17: The Toasters, Senior Discount; 9pm; $?; 21+ ( I think); The Cafe / Parlor Newport, 200 Broadway, Newport. Speaking of memory lane trips into the ’90s, New York City ska ska ska used to be king on the weekend at Club Babyhead and the Toasters were regularly in the mix. The Toasters, a third wave band that’s been around since the early ’80s, were the vortex of the movement from NYC.  Singer / lead guitarist Robert “Bucket” Hingley started Moon Ska Records after struggling to find a label to put out their debut. The label would go on to release albums from other influential ska bands such as Hepcat, The Pietasters, The Slackers, Mephiskapheles (one of my favorites) and Dance Hall Crashers. They always put on a great party, and with no tourists around in Newport you can afford a hotel in town to get as loose as you can.

3. Thursday, November 19: Charlie Don’t Surf (Clash Tribute), Jodi Jolt, Jim Daily, The Nymphedels; 7pm doors / 8pm show; $7 advance / $10 day of; 18+ only; The Spot, 180 Pine St., Providence. I love a good gamble and this show is the bet of the month for me. I have no idea who is in Charlie Don’t Surf. I don’t know if they are local (my computer crashed at deadline and I’m not a big search on my cell phone guy). I generally do not enjoy cover bands; however, I have been impressed by a few in recent memory. Stop Making Sense (Talking Heads tribute), The Power Of Love (Huey and the News) and Hmfo (Hall and Oates) are some must-sees that come to mind. What I do know is I love the Clash, and I only got to see Joe Strummer once before his untimely passing. And I know the songs inside and out, so I will give Charlie Don’t Surf a shot and hope it works out.

4. Wednesday, November 25: Joe Fletcher and the Wrong Reasons, Smith & Weeden, Tall Teenagers; 8pm doors / 9pm show; $12; All ages; The Met, 1005 Main St., Pawtucket. It’s turkey time and that means time for all those who have left the nest to flock home to share Thanksgiving with their loved ones. With the influx of former Rhode Islanders comes RI’s own Americana Roots Troubadour Joe Fletcher. Joe packed up and left for Nashville in back in late 2013. In that time, Joe has become a vital member of the vibrant Nashville songwriter music scene and tours all across the country. This will be the first full band with The Wrong Reasons show to hit Providence in some time, as Joe has been doing a lot dates solo in recent history. Providence mainstays Smith & Weeden and newly formed, but composed of scene veterans (and a former Wrong Reason), Tall Teenagers warm up the bill

5. Saturday, November 28: Elle King; 6pm doors / show 7 to 10pm; $18 advance / $20 day of; All ages; Lupo’s, 79 Washington St., Providence. Elle King’s star is rising at what seems like an astronomical rate and she seems poised to take full advantage of it. This show was originally scheduled for The Met, except it sold out in a day. With demand high, they moved the show into the much larger Lupo’s club, and I wouldn’t be surprised if it sold out there too. I recently caught Elle King with her band in a small sold-out room in Boston and was taken back not only by their musical chops, but Elle’s overwhelming confidence. There is nothing better than seeing a talented up-and-coming star who is fully engulfed in their talent and charisma and empowered by it.