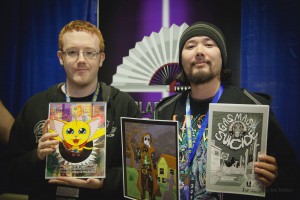 Rhode Island’s tight community has been a focal point to showcase New England’s arts and entertainment at events such as Rhode Island Comic Con (RICC). One of those returning to the vending tables this year is a local studio with stories that explore our wildest of dreams and most terrifying of nightmares: Blade Fan Studio

Started four years ago after meeting in art class at CCRI, Brian Rose and Joe Marhoffer developed their studio to not only showcase their individual works under one brand, but to let people know they exist as local artists starting with the first RICC. “[Brian] simply wanted to include the word Blade because it sounded cool. I chose the word Fan because Brian and I started out as fans of comics, movies, anime and video games,” said Marhoffer.

Issues of their current works can already be found in RI and southern Mass at shops such as Annex, Time Capsule and Armageddon as well as online at Amazon. Two of their most popular series are Rose’s Dream Sprites and Marhoffer’s Gasmask Suicide. Dream Rose places the reader’s perspective through 9-year-old Boone, a boy whose life is saved by a talking cat named Tabby that guides him through adventures in the dream realm. The dark comedy Gasmask Suicide is best described as a protagonist named Heathen and his friends living in “the harsh reality of the world like you’d expect to hear from a crust-punk record.”

At a young age, Marhoffer almost gave up on writing and drawing comics until he was introduced to Johnny the Homicidal Maniac and Lenore. “Later, I went to Barnes and Nobel and skimmed through the pages of these graphic novels that were meant for mature readers, such as Preacher, Watchmen and ALIENS,” said Marhoffer.  “It was both the visuals and the writing that gave me back the passion to make comics again.”

While working on future volumes of their stories, BFS already has begun work on more future projects such as Prey System, a more “violent and serious book inspired by zombies and French horror films,” and a high school action fantasy called Dragon Fruit. In the meantime, they will be showing off their works for purchase from comics to posters at RICC and other conventions with hopes to one day get to San Diego Comic Con.

“We’re building an audience here in the Northeast. We wish to do the same on the west coast,” said Marhoffer.

Strumming the Right Chord: The future of promoting local music

The Honeys Sweep the Season