Keep On Moving: The Future Is Purple: Prince is leading us into Halloween 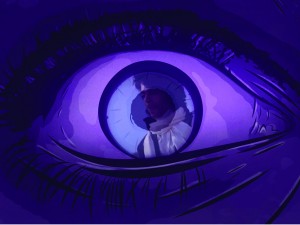 I’m still coming down from watching Deer Tick’s John McCauley front Nirvana during the Foo Fighters’ encore at the CalJam Festival last weekend, but with wing and a shot of tequila, hopefully we can get through this. McCauley led surviving members of Nirvana through spot-on versions of “Serve the Servants,” “Scentless Apprentice” and “In Bloom” before yielding the mic to Joan freakin’ Jett who closed out the Nirvana set. It was surreal to see someone from Providence fronting what was the biggest band in the world during my youth, but when I closed my eyes, it was pure nirvana. Other CalJam highlights included: A set counting backward through their discography  from Foo Fighters. An infectious punk rock squall from FEA who became one of my new favorite bands. A dose of hilariousness mixed with a shot of rock ‘n’ roll from Tenacious D. Deer Tick’s set, which featured a show-stopping version of “Mange” that made me finally realize why it is in the set every night. Garbage was phenomenal, capped by a version of “Only Happy When it Rains” that started like a torch-lit lounge number before catapulting and bringing the house down. Oh, and then there was Iggy Pop! The ageless Godfather of Punk led his Post-Pop Depression band, which included Josh Homme from Queens of The Stone Age, through a mix of tunes from their album together and from his late ’70s albums with David Bowie. One of the best festivals I’ve ever attended, hands down.

The sophomore EP, As The Earth Shakes, from Jets Can’t Land picks up where their debut, You Can’t Linger On, left off and pushes the barrel over the cliff with seven sci-fi tales set to indie guitar swing pyrotechnics. You want rock, well on  “Dc-10” and “Your Boyfriend Godzilla,” Jets Can’t Land deliver. The former has a bit of a Sister-era Sonic Youth vibe while the latter comes off as an ’80s hardcore played by aliens from the future in an after-hours joint on the edge of Tokyo. “Stranded On The Moon” and the closer, “Bones of You” both have a cool lost in space yearning that just makes me yearn for more Jets Can’t Land. You can get lost in space with Jets Can’t Land by catching them in their first ever all acoustic show.

Jets Can’t Land will do their first ever acoustic show with Jodie Treloar Sampson at Fort Foreclosure, 164 Water St, Warren. The doors open at 7pm, and capacity is 35 people, so get there early.

I caught Big Thief a couple of years ago at the Newport Folk Festival where they were by far one of the highlights of the weekend. Big Thief do indie folk with a bite. I recommend checking out their album Capacity and in particular, the tracks “Shark Smile” and “Humans,” to get pumped for the show!

Big Thief and The Range of Light Wilderness play the Columbus Theatre on October 19.

Sometimes a fresh biscuit comes in the mail unexpectedly and you have no idea who the group is, but you take one look at the cover and know you’ll love it. That was the case with the new one from The Knickerbocker All-Stars, Love Makes A Woman. The Knickerbocker All-Stars are the backing band for two powerhouse female vocalists in Darcel Wilson and Thornetta Davis. Wilson has been an instructor of voice, ensembles and voice at Berklee College of Music for 20 years. Davis is known to blues enthusiasts as Detroit’s Queen of the Blues and has racked up 30 Detroit Music Awards over her career.

As for the biscuit, Love Makes a Woman is classic soul and R&B done right. Some tunes, like an uplifting take on “Higher & Higher,” will make everyone run to the dance floor, but the lesser-known ones are what got me groovin’. The title track is a hip-shaking take on the Barbara Acklin classic. “So Soon” is propelled to life by the killer beat and Wilson’s vocals. On “Nick of Time,” Davis takes over the mic and the band doesn’t miss a beat. The closing, “Since You’ve Been Gone,” is a shot of soul and my favorite here, but the whole disc is pretty much a readymade soundtrack to your next party. Speaking of parties, don’t miss The Knickerbocker All-Stars Album Release Party at the Knickerbocker in Westerly, which is one of my favorite local venues.

The Knickerbocker All-Stars featuring Darcel Williams celebrate the release of Love Makes A Woman with a release show that includes a tribute to Aretha Franklin at the Knickerbocker Cafe, 35 Railroad Ave, in Westerly on Oct 26. The show is at 8pm with doors at 7pm. Advance tickets are available: knickerbockerallstars.com

This is a triple-headed beast of the show, headlined by the country folk of Robert Ellis with Deer Tick’s Ian O’Neil and Dennis Ryan both doing solo sets. O’Neil recently finished a solo album, but the release date is to be determined. Ryan released his solo debut earlier this year under the name Vincent Van Gold. It’s available on Spotify and other streaming services.

I had pretty much written off The Breeders for new music after being disappointed for a few albums, but out of curiosity checked out their new album, All Nerve. The first track, “Nervous Mary,“ was like my Michael Corleone moment: “Just when I thought I was out, The Breeders pulled me back in.” All Nerve checks all the boxes for what I want in a Breeders album, from a quirky but catchy single (“Wait in the Car”) to a dreamy indie ballad (title track). There is even an epic quasi-rocking ballad in “Spacewoman,” which is a homerun. I caught The Breeders earlier this year for the first time in about 25 years, and it was worth the wait. Kim Deal is still the coolest person in the room. Don’t miss them at The Strand.

The Breeders and Screaming Females will rock The Strand Theater on Oct 27.

The weekend before Halloween has a definite purple tinge as former Prince protegee (of Vanity 6 fame) and Rhode Island native will be performing her new CD, Once Again, in its entirety at the Blackstone River Theatre. Bennett is a Rhode Island Music Hall of Fame inductee, which makes her a local legend. And Prince didn’t work with just anyone, to catch his eye one had to be a serious talent.

Brenda Bennett will perform her new CD Once Again in order on Oct 27 at the Blackstone River Theatre, 549 Broad St in Cumberland. The show starts at 7:30pm.

Purple weekend continues when Prince’s famed backing band, The Revolution, brings the party to The Strand. You know them from the movie Purple Rain, and they were Prince’s backing band through many of those classic albums like Around The World in a Day. The Revolution will be performing exclusively all new tunes … just kidding they will be playing all Prince’s hits that you know and love!

The Revolution will bring the dance party to The Strand Theater on Oct 28.

This column wouldn’t be complete without a dose of classic nerdy alternative rock from then Johns in They Might Be Giants. They Might Be Giants still have it as far as quirky rock anthems as one listen to their new single, “The Communists Have The Music,” proves. They Might Be Giants put out a new record earlier this year called I Like Fun, which has all the humorous toe tappers and Casio keyboards that they are known for. Now if you’ll excuse me, I have to get back to figuring out how to clone myself so I can attend all this awesomeness.

They Might Be Giants will be at the Columbus Theatre on Oct 28.

All Aboard!: WhistleStop Rock Festival rolls into town