On Posted on January 5, 2014January 9, 2014 by Mike Delehanty to Keep on Moving, Music, Things to do in Providence
Keep on Moving 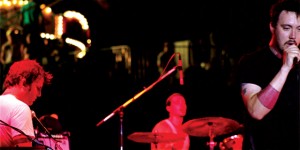 1. Saturday, January 11th: Rustic Overtones, Grace and The RSO, Viking Jesus; $10 advance / $12 day of; 7:30 pm doors / 9 pm show; 18+; The Spot Underground. Rustic Overtones are a band that I have enjoyed from afar for what feels like forever. While blending rock, funk and soul isn’t exactly what I look for, they do it so well that the band has grown on me.  They sound good on record, and they sound amazing live.  They sound like a wedding band that doesn’t give a fuck for covers or what you think of them. They have high energy and blend funk, soul and sometimes ska-like grooves. Grace and the RSO and Kris Hanson and company’s Viking Jesus round out the bill. Last time I caught Viking Jesus at The Spot was the best show of theirs of I have seen, so get there early to see if they can recapture that fire.

2. Wednesday, January 15: Yuck, Alvvays, Velah; $15; 8 pm doors / 9 pm show; 18+; The Sinclair, Cambridge, MA. Yuck are at the top of the list of bands I have never seen but want to. They seem to have mastered in drawing from 90s indie rock influences and making original jams none the less.  After their first album, they lost original singer Daniel Blumberg. Their second album, Glow & Behold, (Fat Possum) continues without him and guitarist Max Bloom sliding into the front man position. Their songs tip the hat often to Built To Spill, Sonic Youth, Pavement, Superchunk and Dinosaur Jr.  Speaking of Dinosaur Jr, I recently caught them at the Sinclair. What a great place to catch a show even when the venue is sold out there isn’t a bad sight view in the house.

3. Friday, January 17: Self Defense Family, Pity Sex, Ovlov, Loss Leader, Bad Swimmers; $10 advance / $12 day of;          7 pm doors / 8 pm show; All ages; The Met, 1005 Main St., Pawtucket, RI. This has never happened before. My favorite new band name of the year (honorable mention this year to Fat History Month, Food Court, and the band Ken Burns) is also my new favorite band of the year. Their release Feast Of Love (Run For Cover Records) is the best emo indie release since Jade Tree records was cranking them out in the turn of the 2000s. This show is a co-headline with Self Defense Family, a band that is very difficult for me to describe. They remind me of a lot of bands and none really share a theme.  Check them out on YouTube and check out selfdefensemusic.com for a variety of punk self help advice, some useful, some often far from it, but pretty entertaining. Ovlov, Loss Leader and Providence’s breakout band Bad Swimmers round out the bill.

4. Sunday, January 26: Man Man; $15 advance / $17 day of;                             8 pm doors / 9 pm show; All ages; The Met, 1005 Main St., Pawtucket, RI. The return of Man Man to The Met! It’s been a couple of years since they have been in town and in 2013 they released On Oni Pond (Anti Records). This record seems to reel in the wild chaotic side of Man Man. While you still have wild multi-instrumentation that the band is know for, the vision seems reeled in and focused. The lead single, “Head On,” is definitely worth a listen, and sounds like it could have been an outtake from front man Honus Honus’ fantastic side project Mister Heavenly, a vision they called “Doom Wop.” This is the best show of the month and highly recommended.

5. Friday, January 31: 95.5 WBRU Presents New Politics, Magic Man, Sleeper Agent; $15 advance / $17 day of; 7:30 pm doors / 8:30 pm show; All ages; The Met, 1005 Main St., Pawtucket, RI. A trio of upcoming alt rock bands headlined by Denmark’s New Politics. They fall into a category in my head called commercial rock, as in they literally sound like their songs should be pitching cell phones and small cars driven by gerbils (see Fun, Grouplove, etc). Boston’s indie electronic pop act Magic Man play in the middle. Their recent EP You Are Here is up on Bandcamp and worth a play.  Opening act, Sleeper Agent, are a blast live. Hailing from Bowling Green, Kentucky, the band seems to be constantly on the road, and this is the third time in the last year or so they have played our town.

TagsThings to do in RITo do in RI